A mysterious sign appeared in our neighborhood trash collection area around New Year. In addition to being the receptacle for our weekly waste, the concrete bunker also serves as the neighborhood bulletin board. Usually the messages are related to trash pickup, but I could read enough of this sign that I knew it wasn’t about garbage.

I snapped a photo and, after a few minutes with Google Translate, I discovered the local community center was hosting a South American music performance. I slapped it on our calendar and we made plans to attend.

A row of shoes greeted us at the community center

On the day of the performance, we climbed to the second floor of the community center, greeted by a row of shoes placed on newspaper. A basket of slippers sat nearby and we dutifully replaced our shoes with the public slippers. Many brought their own slippers, so we’ll know for next time. 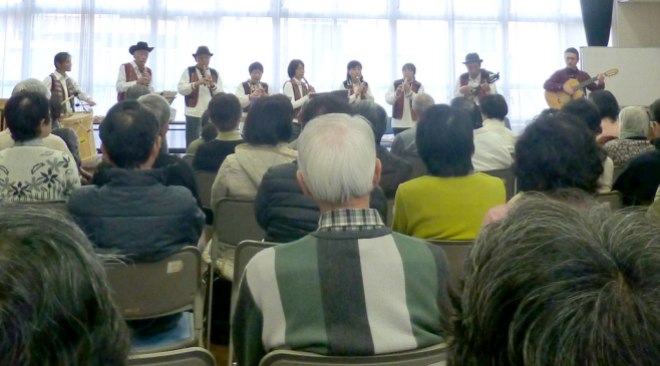 The band was made up of nine very skilled Japanese musicians. A couple of them played the zampoña (pan flute), two others played the charango (lute) and an energetic drummer pounded away on the bombo legüero, all the while urging the crowd to clap along. They reminded us of a less-authentic—yet equally talented—version of an Ecuadorian group we sought out at the Oregon State Fair every summer.

We were handed a couple sheets of paper when we came in. One was a schedule and the other a lyric sheet. Over the course of an hour, the audience was encouraged to sing along with about half of the songs. I couldn’t read fast enough to sing along, but I was surprised at how well I was able to follow along while our fellow listeners harmonized with the band.

After the show, people shuffled into a room across the hall for snacks. We tried to slip out quietly, but were stopped by one of the organizers who spoke just enough English to get his point across—it’s very important that you stay and celebrate. OK… shoes off, slippers back on.

Our neighbors gather around the great feast celebrating the new year

We were glad we did. We told the man our address and he attempted to find our neighborhood table. In the end, I think we were just added to a table with some empty space as we didn’t recognize anyone at the table. Immediately, our new neighbors poured us green tea and began asking questions. One man spoke excellent English while another couple had a daughter living in the U.S. and learned a little bit of English each day on the internet.

Each table had the same spread: pizza from the recently-opened Domino’s, assorted hosomaki (thin sushi rolls), sandwiches, fruit and desserts. We waited and watched how they handled the food (some ate the pizza with their hands, others with chopsticks!) and followed suit (pizza with hands… our chopstick skills are good, but this was some next level stuff!). 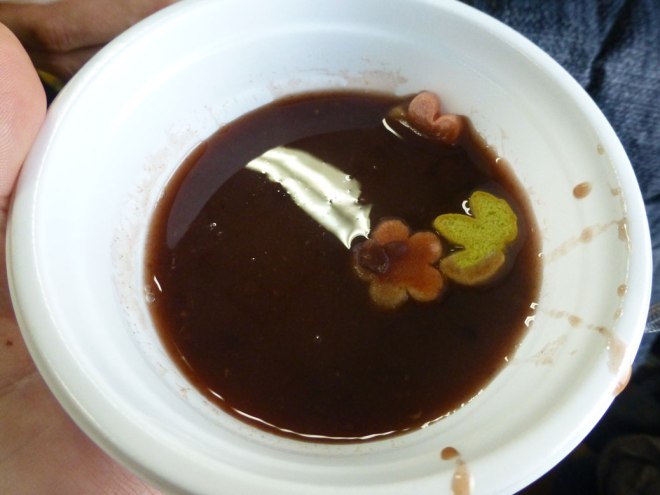 A bowl of oshiruko with flower-shaped cakes floating in it

At the end of the meal, the best English speaker asked if we wanted some New Year dessert soup. Oshiruko is a cold, sweet bean soup often served with mochi cakes. Ours came with small, multicolored, flower-shaped cakes that resembled the marshmallows in Lucky Charms cereal.

After lunch, a man named Naka, who participated in the local English Club, came over to talk with us. Shortly after, he brought over another member—Kuni—who works as an investment banker and spent five years in the 1980s working in the World Trade Center in New York City. They asked the usual questions (where are you from, why are you here, etc.) and we talked about how difficult it is to learn each other’s languages.

The finalists in the Rock, Paper, Scissors contest gather at the front of the crowd to accept their prizes

While we talked, the organizers passed out rubber bands to everyone in the room. We were about to play the biggest game of Rock, Paper, Scissors (janken/じゃんけん) that I’ve ever participated in.

We paired off and began to battle. In the one-and-done format, if you win, you get the other person’s rubber band and move on to the next opponent. I beat Kuni in the first match, but then lost to a man from the next table who slow-rolled my scissors (choki/ちょき) with his rock (guu/ぐう).

A lady from our table made it all the way to the final group. Although she didn’t win it all, she did return with some sort of coffee-related prize.

We helped cleanup the table as best as possible. As we picked up, each of the ladies nearby placed a handful of the leftover Lindt truffles in front of us. We must have taken six or so with us.

We walked home and I couldn’t help but shake my head. It seems like every time we venture out into our neighborhood, something special happens. We’re still a bit of a spectacle, but people accept us into their communities so readily that the novelty wears off quickly and, before long, we’re just another neighbor.