Last weekend, I was fortunate to have time to take a day trip to Alexandria. Alexandria is north of Cairo and lies on the Mediterranean Sea, where the Nile River spreads out and drains into the sea. I learned in the Nile felucca post that the Nile runs south to north—which defies my logic!

The interesting thing about Alexandria is that it was founded by the Greek Alexander the Great so the Greco Roman influence is felt in the architecture, ruins and religion. It’s where Cleopatra courted Julius Caesar and later ruled fawith Mark Antony (now that is #goals). The sunny blue skies, white washed buildings and colorful boats gave more of an Athens than Cairo feel. I was elated by fresh sea air and blue skies! 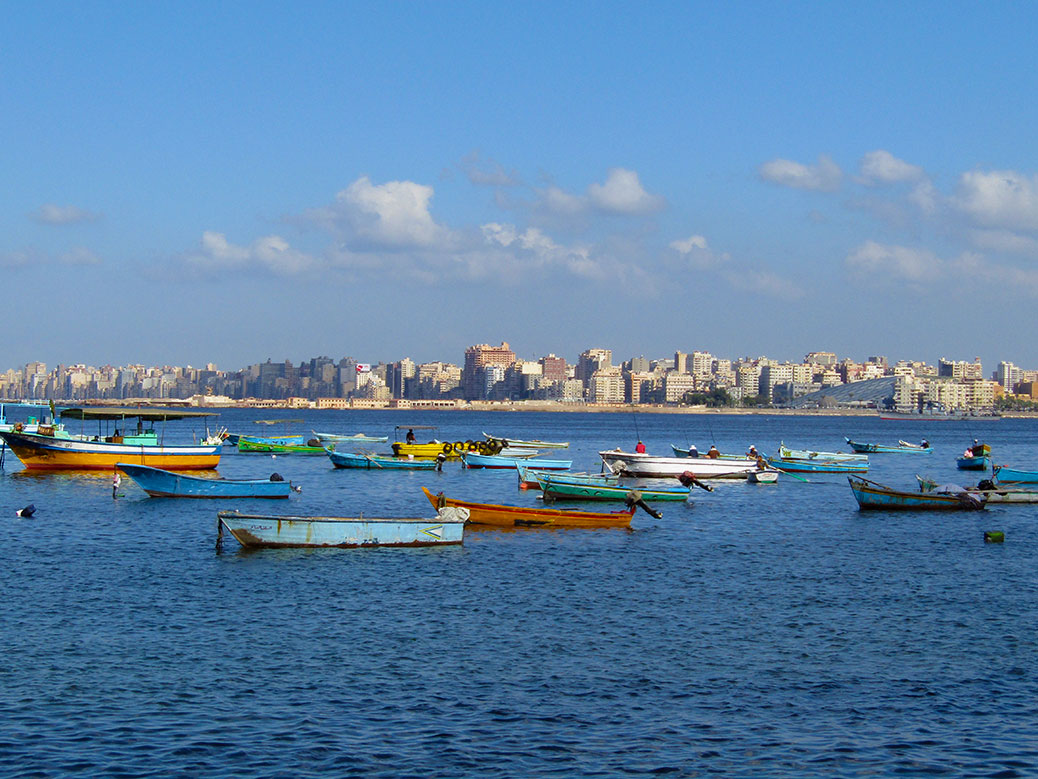 Are we still in Egypt? The slanted building to the right is the Bibliotheca Alexandrina.

Robert had a discount code from winning a photo contest with Urban Adventures so I used it for their day tour of Alexandria. Urban Adventures tagline is ‘Best. Day. Ever.’ And it really was. The drive time to Alexandria from Cairo is about three hours, give or take an hour depending on traffic. 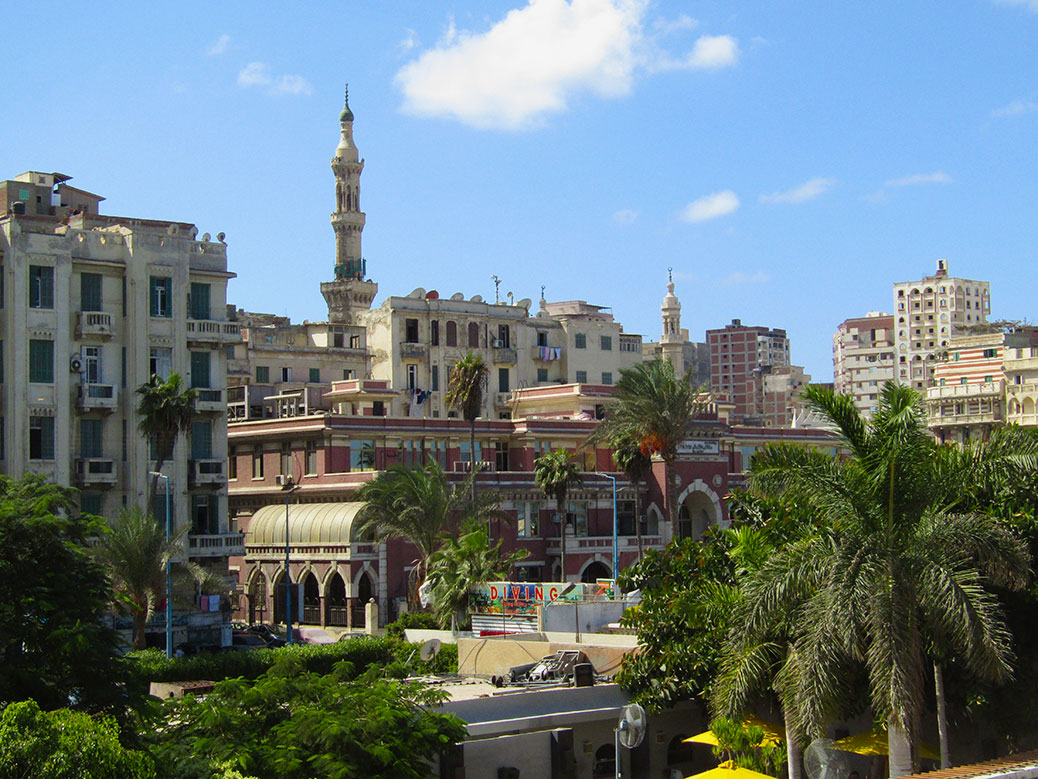 Blue skies and palm trees in Alexandria. And it wouldn’t be Egypt without a couple of minarets!

We started at the city’s Kom el Shoqafa catacombs; I didn’t know it was one of the Seven Wonders of the Middle Ages. It was discovered in the modern age of 1900 when a donkey almost fell down one of its air shafts. The catacombs were the city’s underground burial place for humble residents and honored royals alike. When I first heard “catacombs,” my mild claustrophobia kicked in with visions of long, dark tunnels and skulls. Thankfully, the tombs were well lit with plenty of headroom and oxygen.

The artwork on the main familial tomb had both Greek influenced art—after viewing the drawings inside in the Sakkara tombs, I could see the difference. Greek art is more rounded and freestyled while Egyptian is more angular and uniform. Our guide said that if Egyptian artists had painted pyramid tombs as carelessly as the Greeks they would be fired!

Greek style art in the main burial chamber of the catacombs.

Next, we passed by the Romans ruins of an amphitheater, which again, made me question where we were. The ruins were only discovered in 1960, accidentally again. They were purportedly used as a meeting or lecture hall. 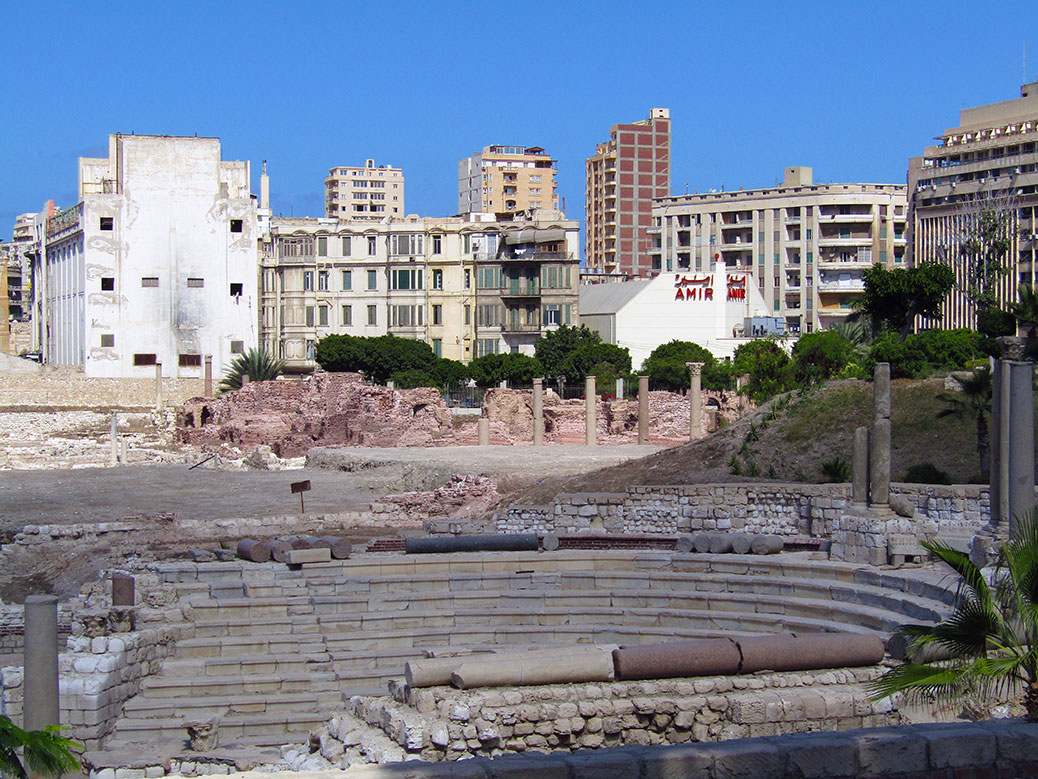 The Roman Amphitheater in Alexandria.

After lunch, we started exploring my favorite part of the city, which is the corniche, or waterfront area. It was gorgeous!

Our little group started to scatter in all directions to take pictures. With the city to our left and the water and boats to our right, we strolled until we reached the Qaitbay Citadel. 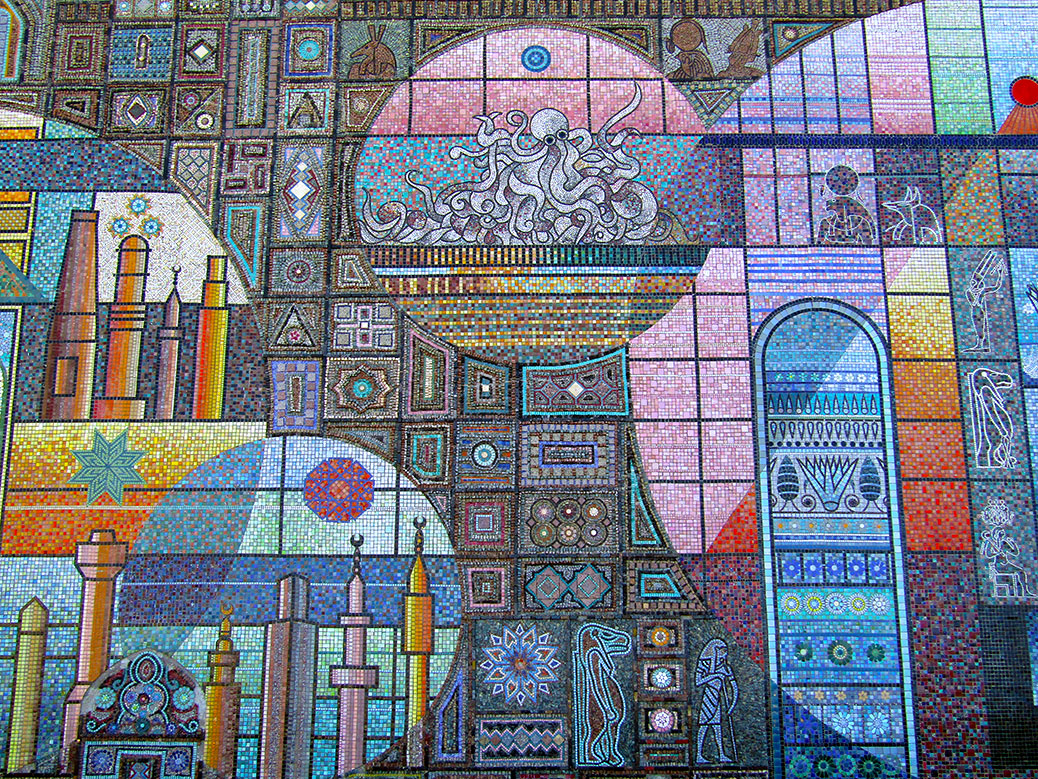 The Modern Mosaic by Fort Qaitbay. Mosque and minarets are pictured on the bottom left. Beside, stand the gods Taweret and Ra.

This citadel is built upon the exact location of the original Alexandria Lighthouse (one of the Ancient Wonders of the World). The lighthouse used to be the tallest manmade structure in the world, which is amazing considering it was on a tiny island.

It’s unfortunate that of the tourists who do come to Egypt, few make it to Alexandria. I’m lucky to have experienced it and I’m looking forward to my next trip! 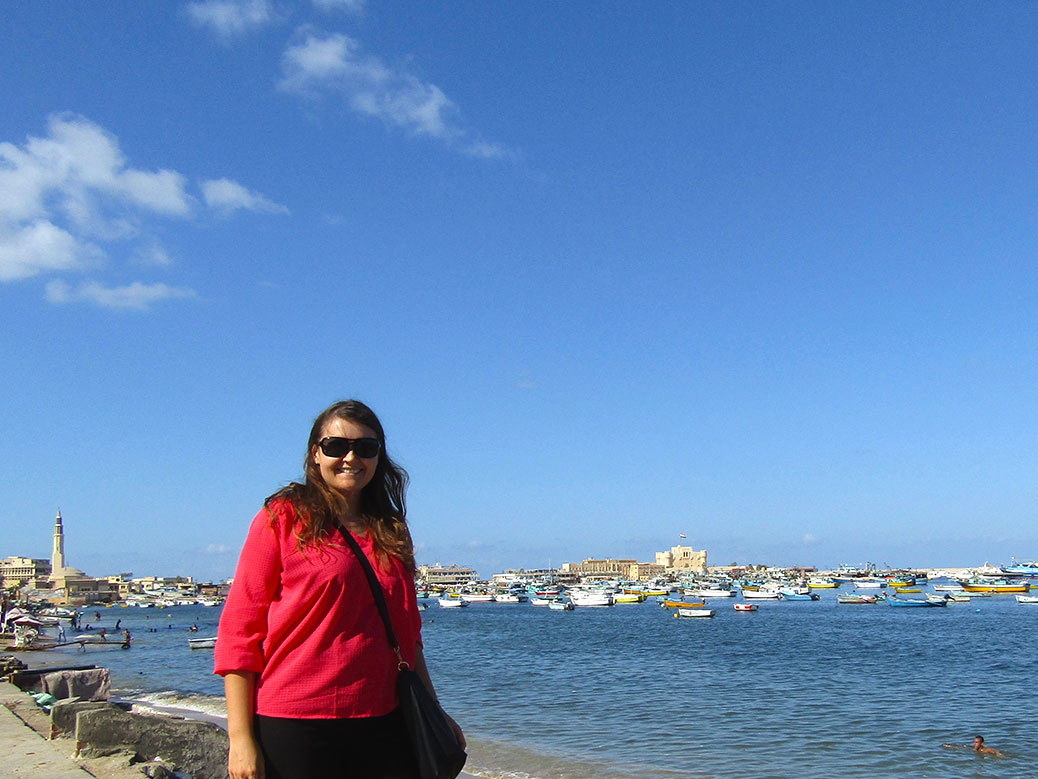 Look for an upcoming post about the Bibliotheca Alexandrina (Alexandria Library).