We started our day before the day itself got underway, arriving at the Miyajimaguchi Pier ferry terminal just as the sun began to rise over Itsukushima Island. The ferry set sail right on schedule, carrying us through the morning mist hovering atop Hiroshima Bay. 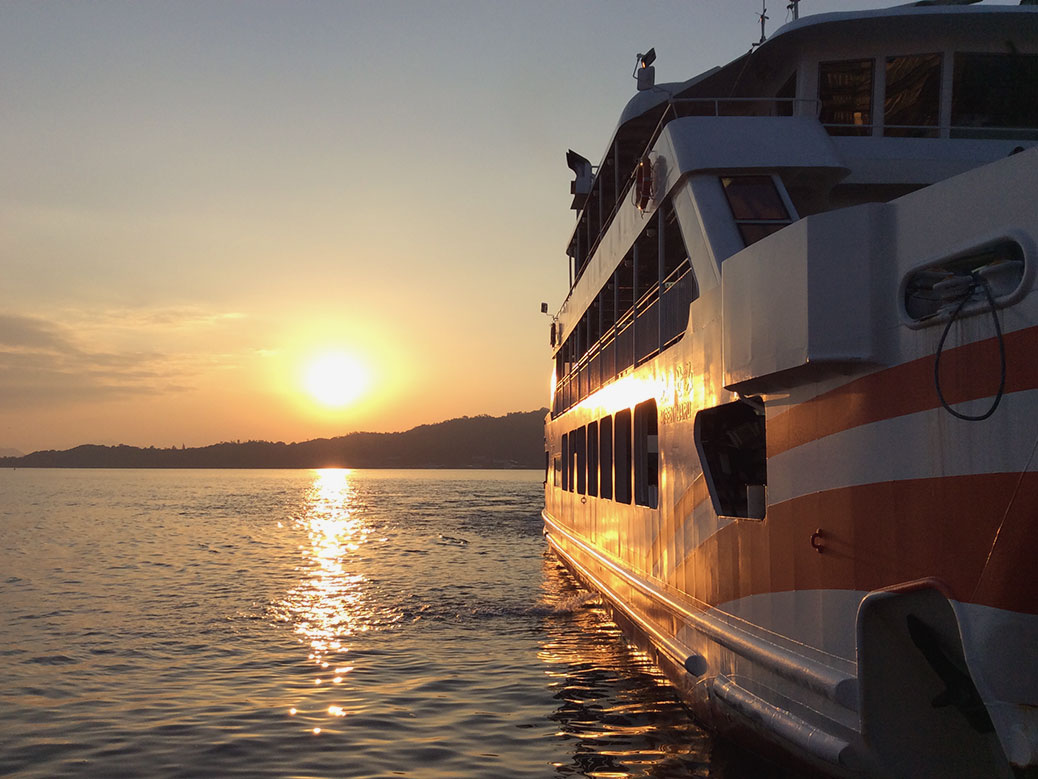 Sunrise over Hiroshima Bay and Miyajima

As we approach, the inspiration for the island’s popular nickname—Miyajima (Shrine Island)—emerges through the mist. First, the Great Torii, glowing in orange lacquer, appears just beyond the water’s edge. Then, the sprawling complex of Itsukushima Shrine and the five-tiered pagoda comes into view. It’s picture perfect. 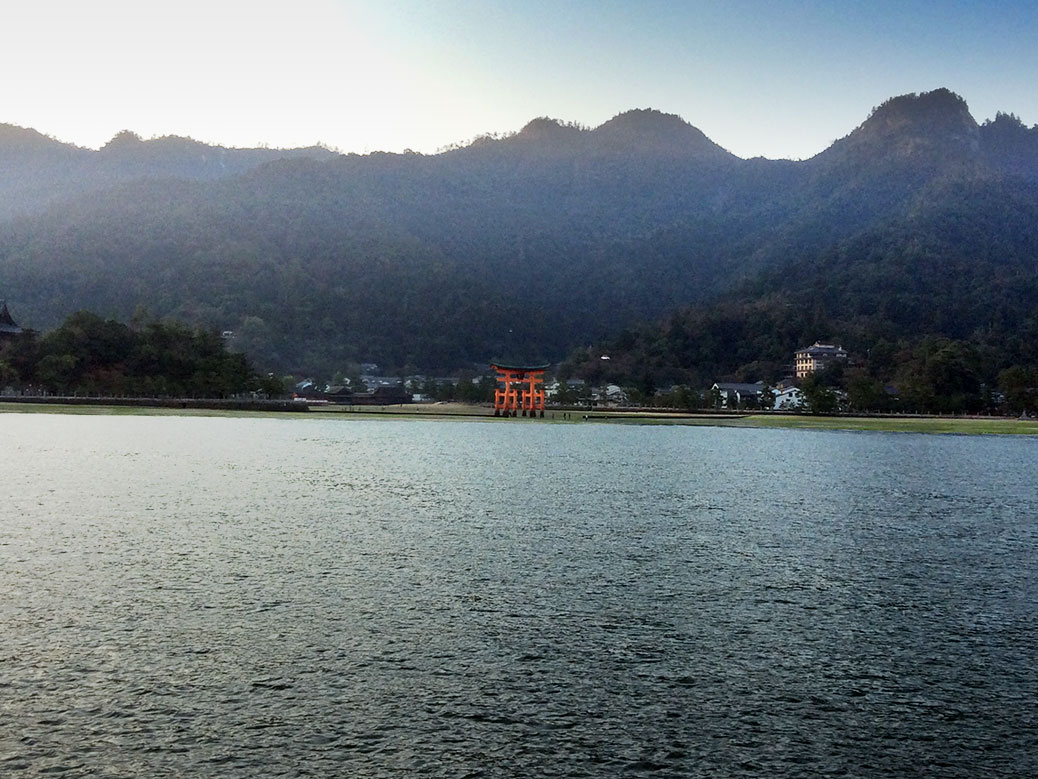 The Great Torii of Miyajima appears in the morning mist

The Great Torii and Itsukushima Shrine are both listed among UNESCO’s World Heritage properties, and for good reason. The Great Torii is in its eighth iteration, this one standing since 1875. Built from 500 year old camphor tree, the 16-ton gate rises nearly 55-feet into the air. Perhaps most impressively, it stands directly atop stones on the seabed instead of being buried into the ground. The weight of the wood and seven tons of fist-sized rocks hand-set in the roof keep the torii planted in place.

The morning sun casts a glow on the Great Torii

At low tide, the seaweed looks like grass along the shoreline near the Great Torii

The Great Torii at low tide in the early morning

In front of the Great Torii

At low tide, you can walk right up to the Great Torii

A series of large stones provide a crossing over the stream running through the Great Torii. This entire area will be covered in water in a few hours.

Making a wish at the Great Torii

Jumping for joy at the Great Torii

Walking through the mud and the seaweed at low tide

A view of the Great Torii from the top of Mt. Misen

A panorama of Miyajima’s World Heritage properties. Left to right: The Great Torii; Toyokuni Shrine and its five-storied pagoda; and Itsukushima Shrine

We arrived early enough to be able to spend an hour or so walking around the torii with only a thin crowd joining us. At low tide, you can walk all the way through the gate, the seabed just firm enough from the dried mud and seaweed. We snapped photos from every angle imaginable. We offered to take photos for strangers who offered the same in kind. A quiet and peaceful morning in a tranquil place.

In fact, we arrived so early that none of the shops on Miyajima’s shopping street had opened yet. Around 9 a.m., we finally spotted a cafe propping its doors and stopped in for coffee. Continuing down the street, we tried some of Miyajima’s famous maple leaf cakes and spotted one of the island’s novelties: the world’s largest rice scoop. A Korean dance group set up near the ferry terminal, the rhythmic beat of their drums audible all over the island.

Character cutouts line the streets of Miyajima’s shopping streets. In this one, my head is a nose.

This one makes more sense

At 25 feet long, this is the world’s largest rice scoop. Rice scoops or shamoji are one of Miyajima’s famous products, often crafted from high-quality wood.

Kids play with balloons while watching the Korean dance performance

A couple kids get the full Samurai treatment

As the crowd thickened, swarming in every 20 minutes via the ferry, we sought higher ground. The Uguisuhodo Nature Walk trail climbs steadily into the heart of the island, finally meeting up with the Miyajima Ropeway station. The cable cars graze the treetops on their way to the top of Mt. Misen.

From a small park along the Uguisuhodo Nature Walk trail, we caught an amazing view of Toyokuni Shrine and its five-storied pagoda

The autumn colors were in full force on Miyajima

The Miyajima Ropeway carries visitors to the top of Mt. Misen

Catching some rays at the Mt. Misen Observatory

Small monk statues were tucked into hidden spots on the top of Mt. Misen. This one was curling a dumbbell while another was adorned with a pair of lost sunglasses.

Kiezu-no-hi or The Eternal Flame has been burning since 806 AD. It was also used as the pilot light for the Peace Flame in Hiroshima’s Peace Memorial Park.

A statue inside the hall holding the Eternal Flame. A quick lap through will leave you smelling like you took a nap in a fireplace.

Small clay Buddha statues are left as offerings at the Mt. Misen Observatory

One of the most popular attractions is Kiezu-no-hi or The Eternal Flame. It is said to have been lit by Daishi himself in 806 AD and continues to burn to this day. Water boiled in a tea kettle over the flame is thought to hold magical healing powers. The flame itself was used as the pilot light for the Peace Flame that burns in Hiroshima’s Peace Memorial Park.

While the torii and the shrines are the main draw, Miyajima might be just as famous for its wild deer. After living with generations of tourists, the deer are mostly docile and don’t really care about the thousands of people walking through their home. However, when feeding time comes, they turn into quite a nuisance, digging into bags or just swiping things out of people’s hands. As we watched the sunset, a deer with a cataract came up and snagged our map of the island out of our bag. He chewed it and swallowed it down, his creepy cloudy-white eye staring at us the whole time.

Wild deer make their home amongst the tourists on Miyajima

A public bath for the deer

The deer on Miyajima can be a bit of a pest. This one was chewing and swallowing our map when I snapped this picture.

In a moment of travel serendipity, we happened to land on Miyajima on the day of Daigan-ji Temple’s Hiwatari-shiki or Firewalking Ceremony. The ceremony is only held twice a year, once in April and once in November.

A monk overseas the Firewalking Ceremony at Daigan-ji Temple

Monks throw thousands of wooden prayer sticks into a blazing fire. In a few minutes, they’ll run through the flames.

The temple’s monks go through an hour-long ceremony, building a towering bonfire fueled by thousands of wooden stakes—offerings left throughout the year by worshippers. They smooth the coals several times over with long bamboo poles as the flames rise and fall. Purifying salt is thrown over the flames and pine branches laid at either end of the inferno. There’s chanting, a conch-shell horn and a lot of theatrics.

As they near the end, one of the monks begins an intricate final dedication, writing Japanese characters in the air with his arm. Suddenly, as the fire returns to its peak, the monks run through one by one. With the drawn out ceremony, the haste of the climax is almost shocking.

Once the flames die down and only the hot coal remains, visitors are invited to partake in the ceremony. The line wrapped around the temple as tourists passed over the coals one by one.