Hiroshima residents woke up to clear skies on the morning of August 6, 1945. The Monday morning commute began in earnest after a night interrupted by periodic air raid sirens, a long series of false alarms.

Around 7 a.m., three small American planes were spotted on radar, but by 8 a.m., yet another air raid warning had been lifted. Military personnel determined the planes were running reconnaissance missions and posed no threat.

One of those planes was the Enola Gay. Fifteen minutes later, time stopped and the world changed forever. 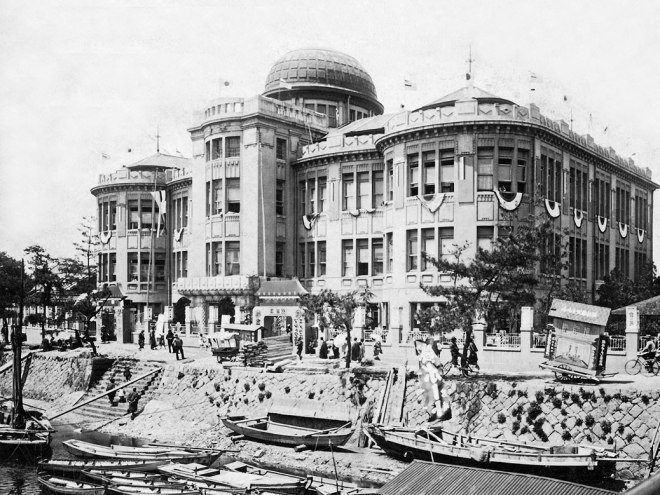 In 1919, the National Confectionery Exhibition was held at the hall. A ringed German cake called baumkuchen was introduced to Japan for the first time. Today, baumkuchen is one of Japan’s most popular desserts.

The Hiroshima Prefectural Industrial Promotion Hall as it looks in 2015, now known as the Atomic Bomb Dome. The east side of the building was facing the hypocenter of the bomb. 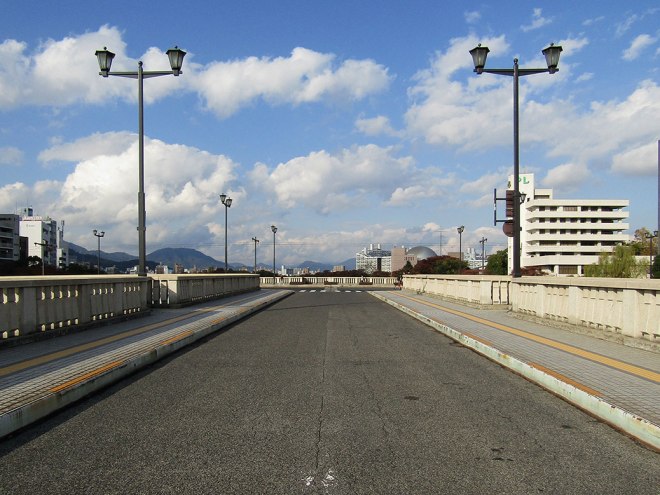 The T-shaped Aioi Bridge as it looks today. The original bridge was damaged heavily by the bomb, but after repairs, it remained in use for another 50 years. In 1983, the current bridge was built as a replica to the original.

Crosswinds pushed the bomb 800 feet to the east of the bridge—it would have drifted directly over Prefectural Industrial Promotion Hall. Forty-five seconds later, “Little Boy” detonated around 1,900 feet above the city, directly over Shima Hospital.

The hell unleashed by the atomic bomb is unparalleled in human history. In an instant, one square mile of Hiroshima disappeared. Fire engulfed another four and a half mile radius. Between 70,000-80,000 people were killed instantly—approximately 30 percent of Hiroshima’s population. Another 70,000 were injured.

The world had never seen a weapon like this and had no idea about the bomb’s residual effects. In the hours and days that followed, family members, friends and rescue workers entered the city, immediately exposed to the bomb’s radiation.

Within three weeks, the death toll had nearly doubled to 130,000. Estimates indicate around 67,000 people entered the city during the period of active radiation. Those who survived still deal with radiation-related illnesses today, including leukemia, cataracts and chromosomal changes.

On August 9, just three days later, the horror would be repeated when a second bomb was dropped on Nagasaki, 300 km to the west. On August 15, Japan’s Emperor Hirohito announced the surrender of Japan, effectively ending World War II. 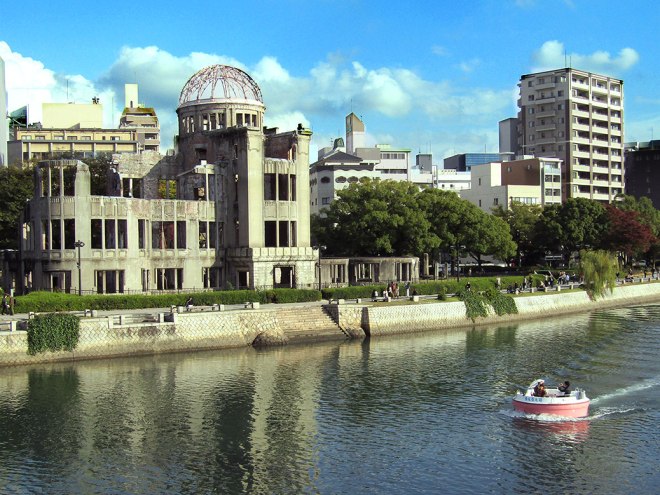 Today, the Atomic Bomb Dome stands as a symbol of peace and a reminder of the horrors of war.

A reminder of war or a symbol of peace?

Despite being only 520 feet from the bomb’s hypocenter, the Prefectural Industrial Promotion Hall was the only structure in the blast radius that wasn’t completely destroyed. Ironically, it’s proximity is the likely reason the structure didn’t collapse completely. The building’s columns were able to withstand the downward force of the blast, leaving the dome and many exterior walls standing.

In the years that followed, the fate of the hall—now referered to as the Atomic Bomb Dome—was up in the air. The structure was growing more and more unstable. While some wanted to preserve the building, others wanted the reminder of the horrors of the bomb destroyed forever.

As Hiroshima started to rebuild in the 1950s, the Hiroshima Peace Memorial Park began to take shape in the area surrounding the Dome. In 1966, Hiroshima’s City Council announced that it would permanently preserve the building as a monument to those who lost their lives in the bombing. The first preservation was completed in 1967 followed by two more in the late 1980s and early 1990s.

In 1996, UNESCO added the Atomic Bomb Dome to its World Heritage List. Today, the Dome anchors the north end of the Peace Memorial Park, a beautiful and thoughtful tribute to not only the victims of the bomb, but more importantly to everlasting peace.

Our first visit to the Atomic Bomb Dome was during the day, but we returned at night a couple of days later. The flood lights created an eerie yet serene feeling in the area around the ruins.

The Atomic Bomb Dome at night

The Atomic Bomb Dome at night

Inside the central dome structure. The fire-colored lighting cast an eerie glow inside the building.

A sign outside the Shima Hospital location indicating the atomic bomb’s hypocenter. Dr. Kaoru Shima rebuilt the hospital in 1948 and it’s still operating today as Shima Surgery, run by one of Dr. Shima’s grandchildren.

The remains of a fountain that stood in a Western-style garden on the south side of the Atomic Bomb Dome.

Close up of the dome’s skeleton

View from the south/southwest side of the Atomic Bomb Dome

Looking up at the outside of the central dome structure

A closer look inside the dome

Looking inside the dome

A close up of the metal skeleton of the dome