Inside the Museum of Egyptian Antiquities

I had a three-day weekend due to the Islamic New Year on Sunday, October 2 so I decided to take advantage of the time off and head out to the Museum of Egyptian Antiquities, or the Egyptian Museum, in downtown Cairo. The coral building is easily recognizable in the famous Tahrir Square, the site of the 2011 Revolution protests. 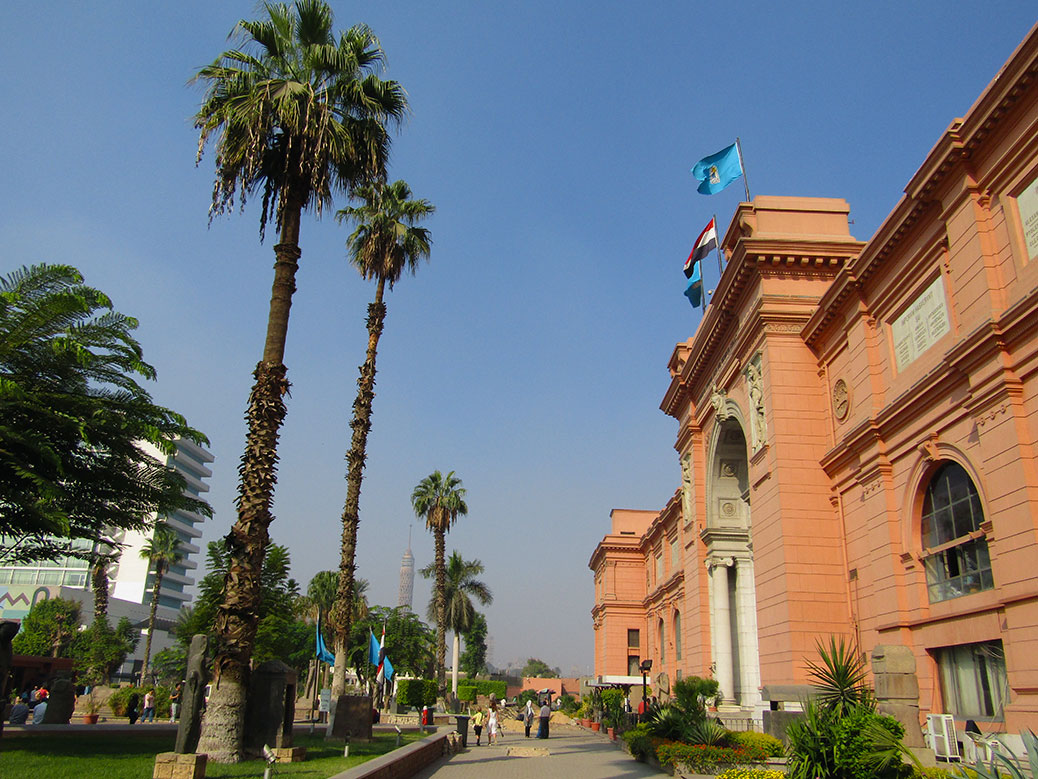 View from the side of the museum and its gardens. Can you spot the Cairo Tower?

I hired a guide and I’m glad I did; the museum is a jumble and maze of mostly unmarked artifacts. It’s not the most organized or clean or secure museum I’ve ever been to—thousand-year-old stuff is strewn throughout rooms with signs that essentially say, do not lean on or touch the priceless tomb/statue/carving. But people do. The concept is very culturally Egyptian—proud but lackadaisical. 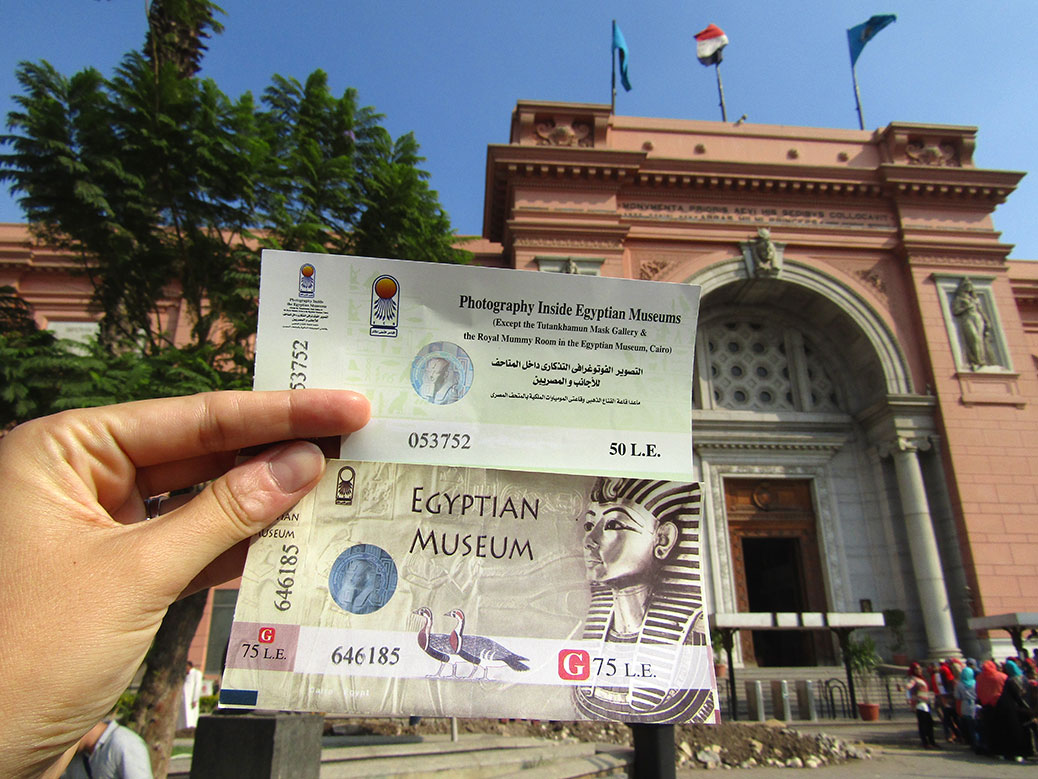 What it lacks in interpretation and modernity, it makes up for in dusty coolness factor. The museum is made up of items collected from various pyramids, including the entire collection of Tutankhamun’s tomb. Wikipedia says it has more than 120,000 items, not counting the ones that were gifted to Austria and other countries. 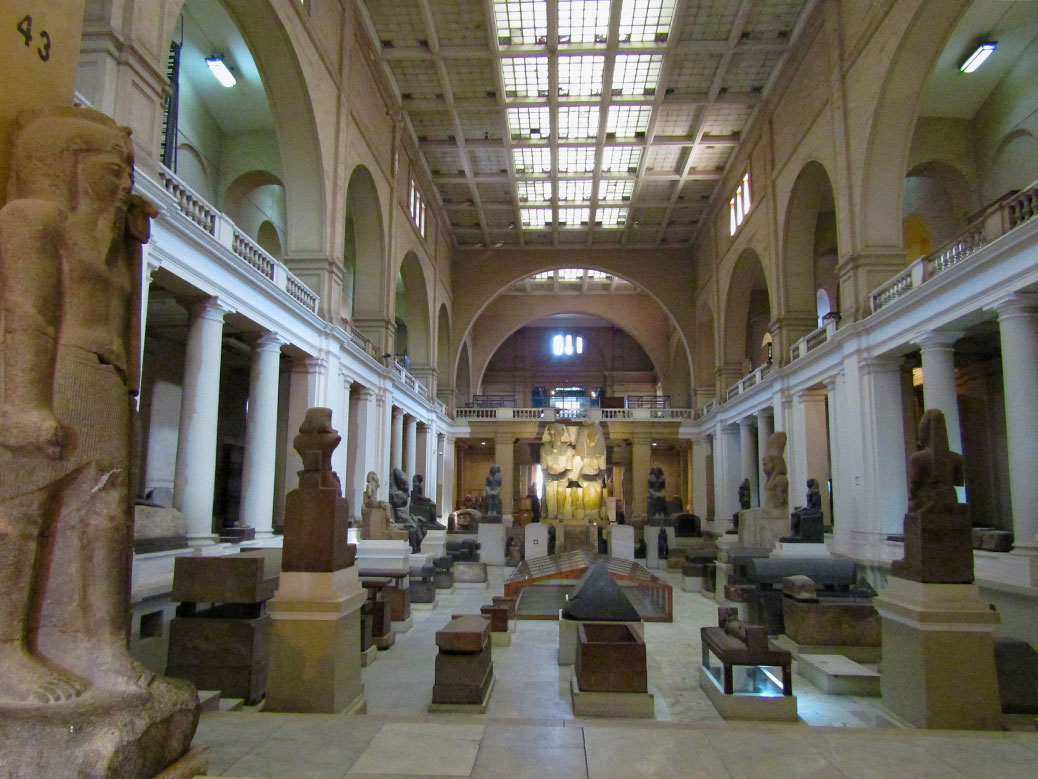 The main hall of the ground floor. I hope nothing falls over!

We started on the first floor (ground floor) with the collection from the Old, Middle and New Kingdoms. First, I saw the statue of King Djoser (Zoser), who built the world’s first stone step pyramid, which I had previously visited in Saqqara. The statue was collected from his pyramid and features the life-size (small!) king with the false chin. 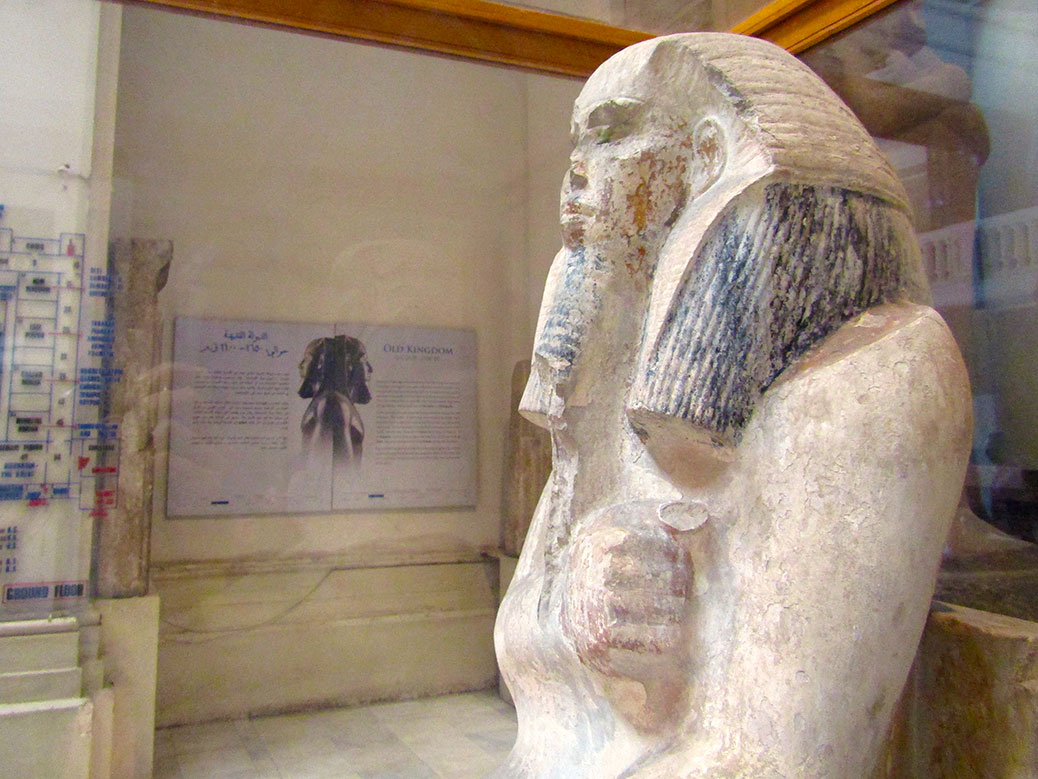 Next, we headed through the main hall to see a stone pyramid top, or the Benben stone from the Pyramid of Amenemhat III. The pyramid below it has since crumbled, but the carved capstone or tip remains. 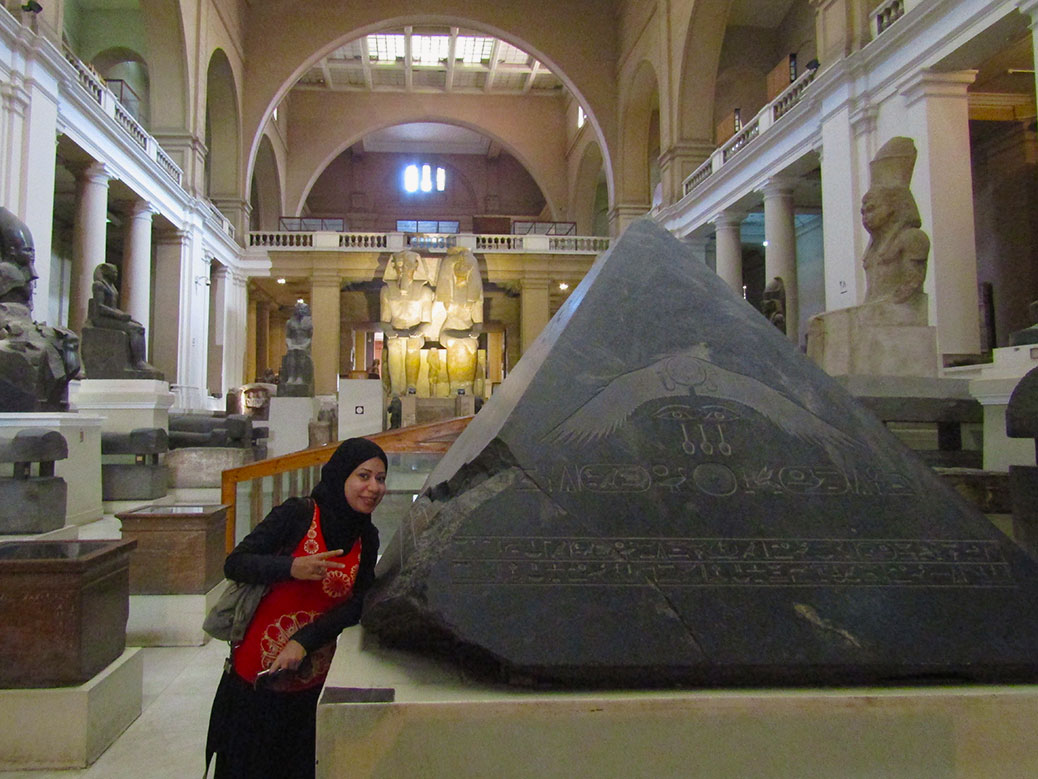 Guide Asmaa next to the capstone carved with a phoenix bird, which is a part of an ancient creation story.

At the end of the hall is a colossal statue of Amenhotep III and his wife, Tiye, grandparents of the famous Tutankhamun. This statue is significant because it’s the first time a woman was depicted as the same giant size as her husband. Notice the size of their daughters at their feet. I later saw Tiye’s eerie mummy (see a photo on Wikipedia), complete with hair in the mummy room (no pictures allowed and that’s fine by me). 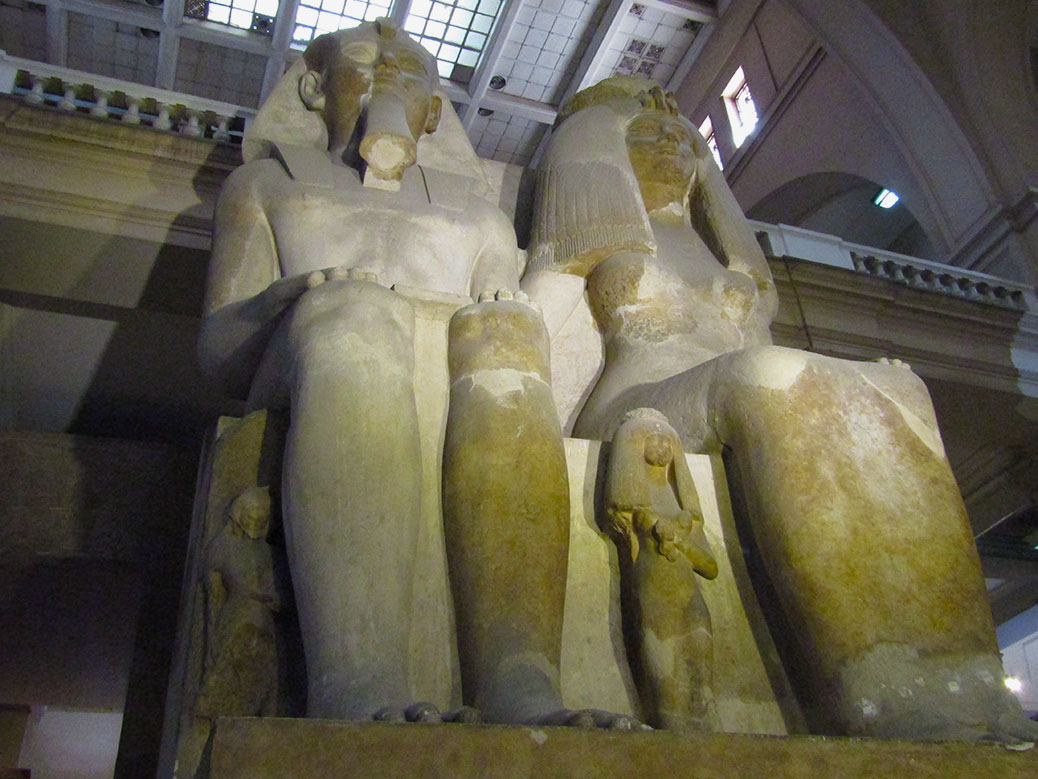 We headed to check out the artifacts surrounding King Amenhotep IV, who was the first pharaoh who decided to worship only one God. His story was featured on Morgan Freeman’s “Story of God” series (go DVR it right now). The show features the beliefs of the ancient Egyptians and the turn to a monotheistic (one God) worship by this king. He later changed his name to Akhenaten to include the name of the God Aten, or “sun.” Unfortunately, he became somewhat of a religious tyrant and his followers scratched out his name in his coffin so that his spirit would NOT return in the afterlife. His successor returned to a polytheistic rule. 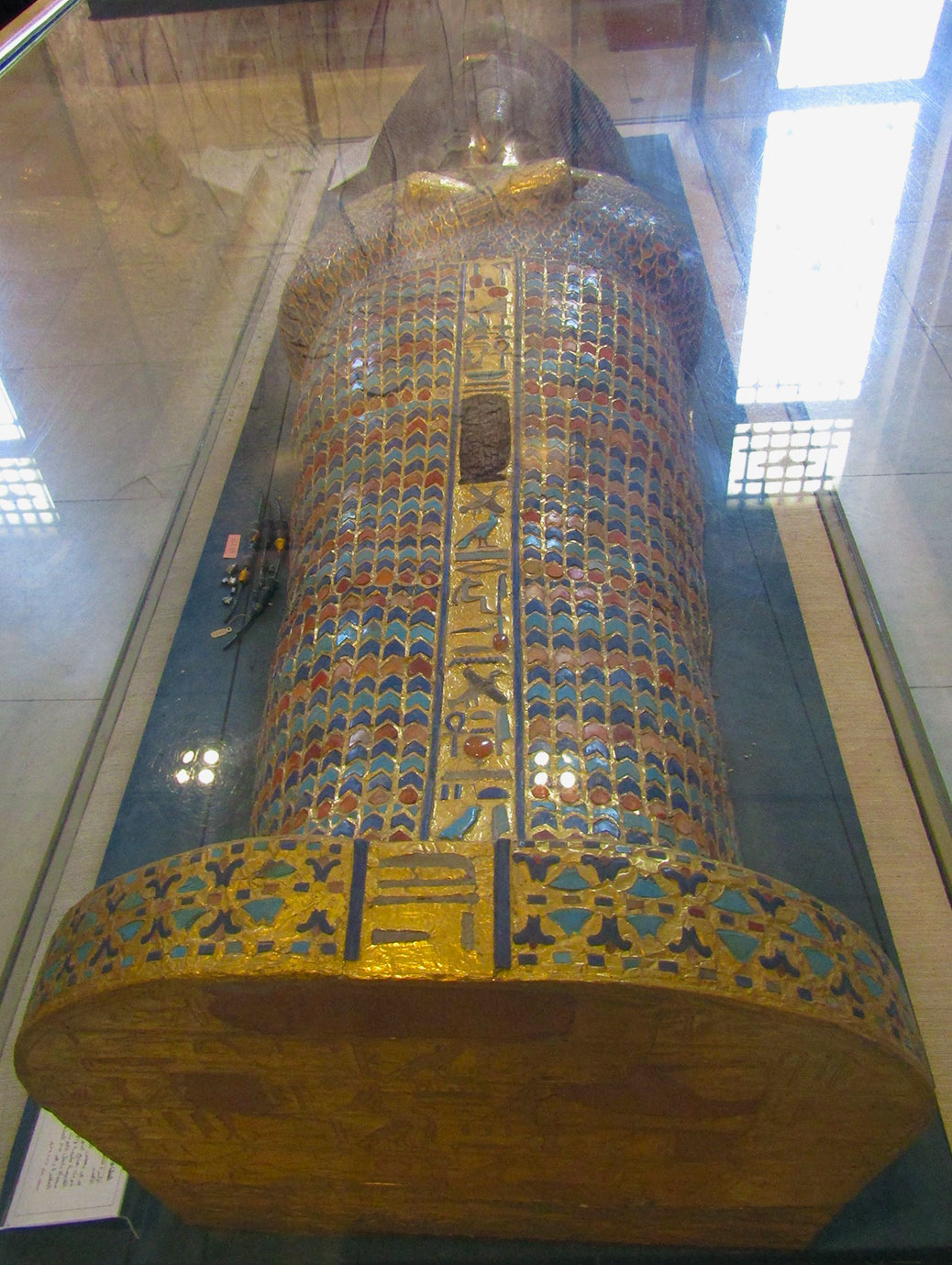 Akhenaten’s wooden coffin found in the Valley of the Kings in Luxor. Look at the middle strip of the coffin. Can you see where the cartouche, or the symbols for his name, has been scratched out?

The second floor houses the pieces of the famous kings and more solid gold bling. Namely, all of the 5,000 things that a boy king Tutankhamun could ever want for the afterlife. We saw his gold ceremonial chair, three funerary beds (in case he wanted to bounce from bed to bed, I guess) and four shrine gold boxes that held his sarcophagus and death mask.

The third bed has a crying lion, grief stricken by his king’s death.

The wooden throne of Tutankhamun features an image of him under the sun (‘Aten’ for his birth name Tutankhaten) while his queen applies perfume on him.

The first funerary bed of Tutankhamun has a pair of cows.

The second bed featured the heads of hippopotamuses.

One of King Tut’s outer golden coffins decorated with lapis lazuli and turquoise.

Due to all of the grave robbing, precautionary measures were taken to hide the body within the layers of gold coffins. I guess it didn’t matter too much because the location of his tomb was lost, not to be found until the famous discovery in 1922.

I also saw the museum’s masterpiece, the famous gold and colored mask of King Tut with the long false chin. It is 24 lbs. of solid gold. Alas, no pictures were allowed.

I hope to return again and explore the museum more on my own.