A person could spend a week in Barcelona chasing the unique designs of architect Antoni Gaudí and not see everything. Of the 19 buildings designed by Gaudí, 12 are in Barcelona proper and seven make up the UNESCO World Heritage collection “Works of Antoni Gaudí.”

We didn’t intend on chasing down Gaudí’s list while in Barcelona, but we ended up seeing three up close and personal. After visiting La Sagrada Familia and Palau Güell, we finished with a day at Park Güell.

The park was another in a series of collaborations between Gaudí and Catalonian entrepreneur Eusebi Güell, intended as a place where Barcelona’s emerging upper-class could build homes and live in a community of shared ideals. For Gaudí, the bare land on Carmel Hill was a blank canvas, a place to explore his artistic tendencies toward harmony between nature and architecture.

Walking into Park Güell is akin to stepping into the board game Candy Land. The first two buildings—the Porter’s Lodge and the Porter’s House—look like they were plucked from the Gumdrop Forest with their whipped frosting roofs placed atop cake-colored brick and decorated with mosaic tile sprinkles.

From the second floor of the Porter’s Lodge, you can look down over the Dragon’s Stairway and the Hypostyle Room. The “dragon” is actually a very large sculpture of a salamander, again adorned in broken tile mosaic. The Hypostyle is a large covered area, the roof held in place by groupings of massive columns. Several large spaces were left inside with the intent of setting up a marketplace for the park’s residents.

Atop the Hypostyle’s roof, Gaudí built a public square. Plaça de la Natura is outlined by a tile-covered bench that curves in and out around the entire edge of the square. From the front edge, you can look out over Barcelona’s Gràcia district all the way to the Mediterranean Sea.

Heading downhill from the Nature Square, you walk through the crown jewel of Gaudí’s attempt to blend nature and structure. The Washerwoman Portico, named for the single carving of a woman carrying a laundry basket on her head, looks as if it could have occurred naturally. Rough, slanted stone columns frame a long, curved walkway. Standing inside the walkway, it appears as if you’re in the trough of a crashing wave.

The park surrounding the monument area is much more simple. The winding path climbs up and down Carmel Hill, offering many quiet moments in stark contrast to the busier interior. The largest crowd will be found on the top of Turó de les Tres Cruces—Hill of Three Crosses—chasing a free view of the city.

With less than 24 hours remaining in Barcelona, we headed for the city’s famous beaches. After a couple cool and drizzly days, the weather gods smiled upon us with a sunny, 70 degree day and the locals and tourists alike were taking advantage. Barceloneta, the main beach along the coastline, was full of sunsoakers, bicyclists, joggers and even rollerbladers (can’t remember the last time I saw an unironic rollerblader in the US). We caught the sunset as it faded away from the Mediterranean and headed back toward the city.

After one last tapas dinner, we worked our way through the Gothic Quarter back toward our apartment when the sound of drums caught our attention once again. We wandered into the parade of Correfoc dels Diables Petits or Fireworks of the Little Devils.

Kids of all ages, dressed in devil costumes and trailed by large bands of drummers, ran down the side of La Ramblas carrying sticks with sparking fireworks attached to the top. When lit by a “responsible” adult, the firework would spin atop the stick, sending a shower of sparks flying into the crowd.

We watched for a few minutes before letting go of Barcelona and heading back to our apartment. The sound of drums and general cheer carried on until early the next morning; a great way to remember our time in Catalonia. 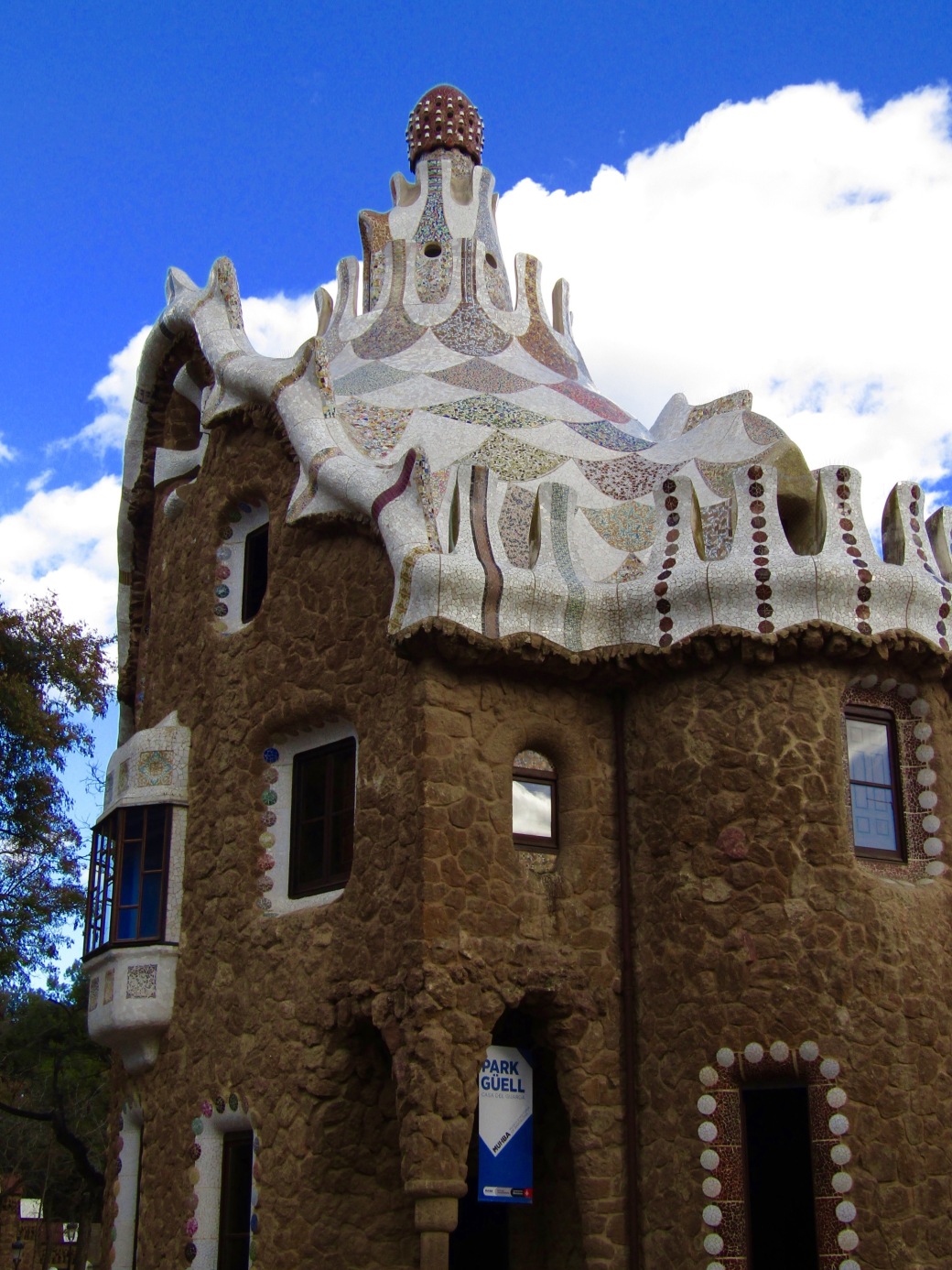 The Porter’s Lodge at Park Güell.

The salamander statue on the Dragon’s Stairway at Park Güell.

Looking down from Plaça de la Natura at the Porter’s Lodge and House. The district of Gràcia and the Mediterranean Sea can be seen in the distance.

The Portico of the Washerwoman. 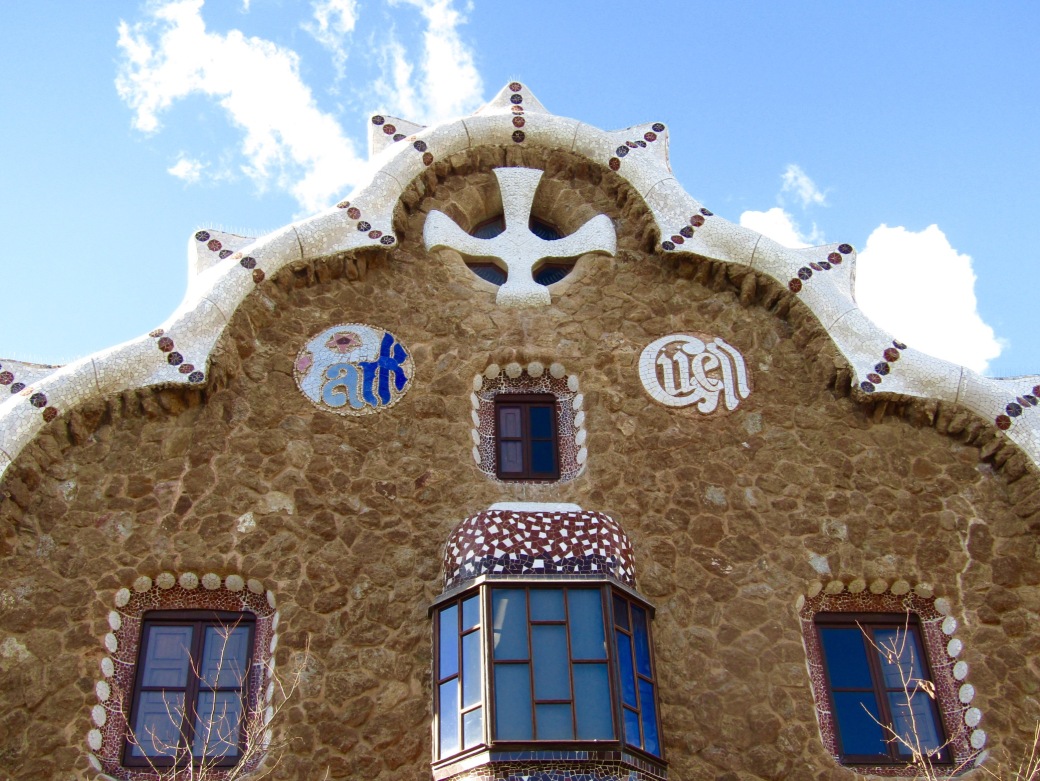 The street-facing side of the Porter’s Lodge.

The sunset from Barceloneta.