It’s not entirely fair to fall in love with a city when it is at its best, but those are cards we were dealt with Barcelona. The already-lively capital of Catalonia was flooded with summertime levels of tourists thanks to the weeklong celebration of Les Festes de Santa Eulàlia.

Saint Eulalia earned her sainthood at age 13 after being tortured by the Romans for refusing to renounce her religion. The festival that honors her focuses on events for and involving children.

We could hear the procession of drums from a block away outside our window on the second morning of the festival. We gulped down the rest of our breakfast, threw on some shoes and chased after the party. While we never caught up with the parade, we did catch the pinnacle of the Diada Castellera, the building of human pyramids, performed by Els Falcons de Barcelona. The pyramid peaked at nine rows, with each row of people getting younger and younger until finally a boy of maybe 6 or 7-years-old caught his balance atop the mass of humanity.

After lunch in the quirky Plaça de George Orwell—named in honor of the English writer who joined Spain’s Independent Labor Party and fought during the Spanish Civil War—we visited another of architect Antoni Gaudí’s masterpieces, Palau Güell.

Part of the UNESCO collection of Gaudí’s works around Barcelona, the mansion was designed for industrialist Eusebi Güell in the 1880s. The home is situated in the middle of a neighborhood of shops and apartments, but the understated facade doesn’t seem entirely out of place save for the large, arched doors with their intricate cast-iron work, a Gaudí signature.

Once inside, the scope of what Gaudí accomplished on the small footprint of land begins to take shape. A large stable sits below ground for the horses who would pull carriages from the street-level entrance. The great room has a soaring spire for a ceiling with perforations meant to invoke the feeling of being under the stars. The perfectly arranged architectural elements throughout create both space and comfort.

The more eccentric pieces of Gaudí’s work were saved for the outside. The wooden shades on the back bay windows recall steampunk design. On the roof, 20 chimneys covered in brightly-colored mosaic tile rise like a technicolor forest. The near-360° views of Barcelona are impressive.

That evening, we headed back into town toward Plaça de Sant Jaume where a small orchestra was set up on the stage. Barcelona’s older population had gathered, creating large dance circles. While the music played, everyone in the circle held hands and performed a simple box step dance that became more intense as the music crescendoed. When the song finished, everyone would cheer, greetings were exchanged and everyone moved on to another circle to begin the next dance with new neighbors.

Soon, the festival’s main event got underway with The Walk and Dance of Laie. The giant puppets we saw on our first day lined up in Plaça de Pi, giving festival goers a chance to see the gegantes up close. Local volunteers served sweet bread and warm chocolate pudding to anyone who was interested.

The puppet crew then mounted up, climbing underneath the puppets, and started the procession through town toward Plaça de Sant Jaume where they waded through the tightly-packed crowd.

The event ended with a light show broadcast on the city hall building, kicking off the second-half of the evening. LLUM BCN featured light installations at 21 different locations throughout the Gothic Quarter. The lines were a hundred deep at each, so we just watched from afar.

We finished our night in true Barcelona fashion, settling in for tapas around 10 p.m. before making our way home for the night. Barcelona was quickly moving up our list of favorite places in the world.

A bridge between two buildings as we approached Plaça de Sant Jaume in Barcelona’s Gothic Quarter.

Our lunchtime view in Placa de George Orwell. The English author joined the Spanish militia in the 1930s to fight fascism in Barcelona, an era he chronicled in his book Homage to Catalonia.

The bay windows at Palau Güell. 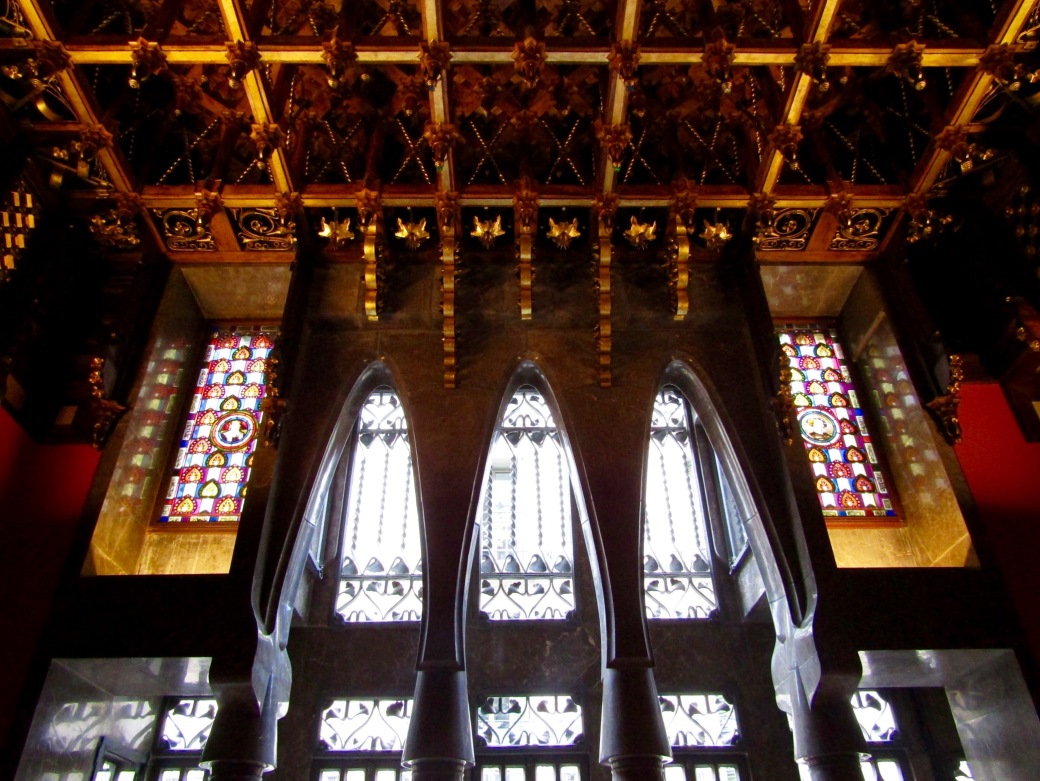 The extravagant interior at Palau Güell. 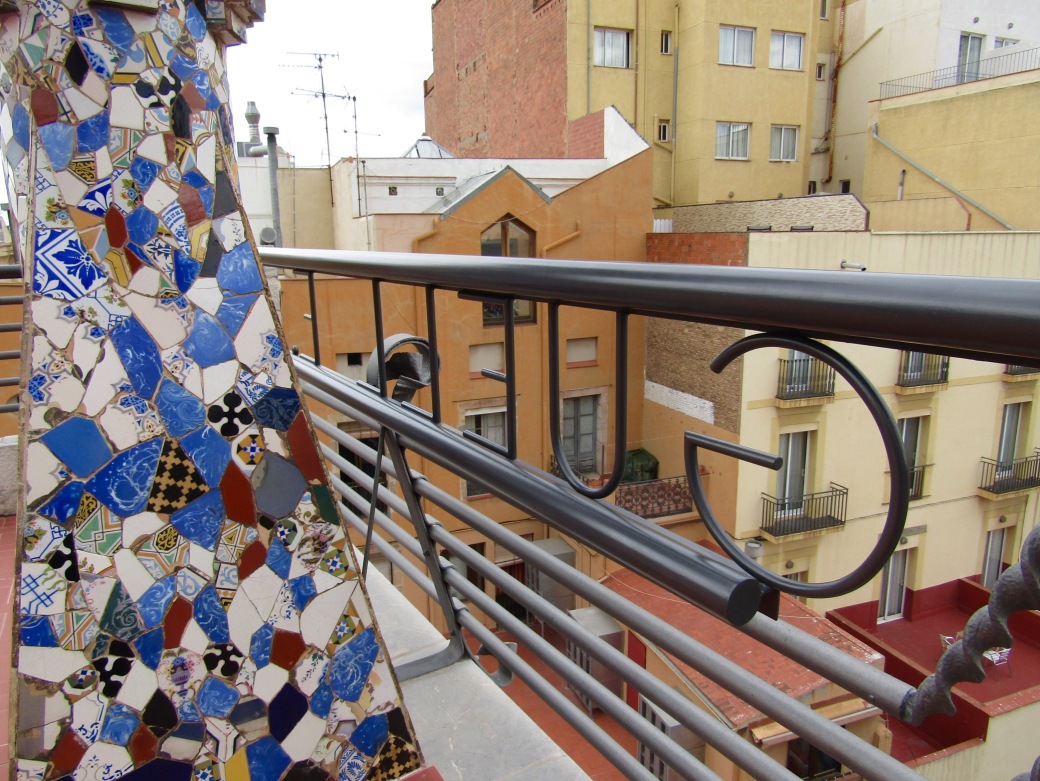 The roof of Palau Güell with mosaic tile work on the chimney and the Güell name written in ironwork on the rail.

The main spire at Palau Güell acts as a ventilation system and lets natural light enter the house.

The Festival of Saint Eulalia in Barcelona, Spain.

One of the 21 light installations that made up the LLUM BCN Festival.