London was a city that really surprised us. It wasn’t on our original agenda, but thanks to all of its airports, it became the piece that allowed us to work in Porto. But with just two full days to explore, we had to buckle down to fit in a representative sampling of Europe’s largest city.

We woke up early and hopped on the red double-decker bus toward Soho to have a proper English breakfast. The Breakfast Club is one of those greasy-spoon places that always have the best breakfast in town. By 9 a.m., the queue was already a dozen people deep, but it was worth the wait. Just a few minutes after we were seated, a hot plate of beans, toast, potatoes, poached eggs and a vegetarian sausage was delivered to our table.

With the freshly-laid brick of a meal firmly lodged inside, we began the long walk through the theater district toward Picaddilly Circus. We came upon a small market at tiny St. James Church. The only permanent craft market in the city, Picaddilly Market run from Tuesday-Saturday and the rent paid by vendors helps with the maintenance of the 330-year-old church.

We veered toward Buckingham Palace, entering via Marlborough Street where a small crowd was gathered. We rarely find ourselves happening upon something at just the right time, but this was our lucky day. Every other day, the palace’s Household Troops perform an elaborate changing of the guard ceremony (Guard Mounting) beginning at Friary Court in St. James Palace and the party was just about to begin.

Soldiers known as the New Guard assembled in the square, beginning with a good-sized marching band followed by the guards armed with bayoneted rifles. As the conductor tuned them up, we slid in behind a tour group to listen in on the explanation of what would happen. The group moved quickly to get ahead of the band and we stayed in their heels.

The New Guard, led by a cheerful tune from the band, marched down Marlborough Street while we waited with the tour group at the intersection with the Mall. As they turned the corner, the tour leader ordered her group to go and we followed along, marching alongside the band to Buckingham Palace. It was a bit of a surreal moment…

Once we reached the palace, the New Guard entered the gates where they would take over as the Queen’s Guard. A few minutes later, the sound of the band picked up again as the former Queen’s Guard regiment marched back toward Wellington Barracks and the end of their duty.

With a newly-found bounce in our step, we walked through St. James Park, arriving at Big Ben, the Houses of Parliament and Westminster Abbey. Crossing the Thames, we entered the South Bank district and followed the Queen’s Walk along the river.

Just behind the Southbank Centre shopping mall, the excellent Southbank Centre Food Market was in full swing. Full of local food and sweets, we’d come for the spicy peppers requested by Cascadian Pugs who has supported our adventures in Japan with copious care packages over the past two years. The cookie and tea were just for us though.

We continued northeast along the river, passing the bridges, shops and cafes. A tourist-trap museum denoted the former location of London’s notorious medieval prison known as The Clink.

We finally arrived at Borough Market in the Southwark neighborhood. One of London’s largest and oldest food markets, it claims to have begun in 1014 and has a documented history dating to 1276. Packed tight with tourists, we waded through the crowds from one end to the other before circling back for lunch. The punny Pie Minister served up traditional pot pies, creamy mashed potatoes and smashed peas mixed with mint. Not much to look at, but it dispelled the myth of British food being bland.

Powered up for one final push, we took the tube to Notting Hill. The charming and funky neighborhood popularized by the movie of the same name has a small, colorful residential area followed by a very long shopping street. Portobello Road begins with typical souvenir shops, most of which prominently feature Hugh Grant and Julia Roberts on t-shirts. But the further you go, the more the tourists drop off, more placed by locals taking advantage of the various food tents set up on the road.

At the far end of the road, the Acklan Village Market appears like an alternate universe. Flush with vegetarian food carts, live music and craftier vendors than its neighboring market, it’s a Bohemian bubble all its own.

With a large part of our London list taken care of, we returned to Baker Street to investigate a little rest and relaxation. We’d have another big day ahead of us… 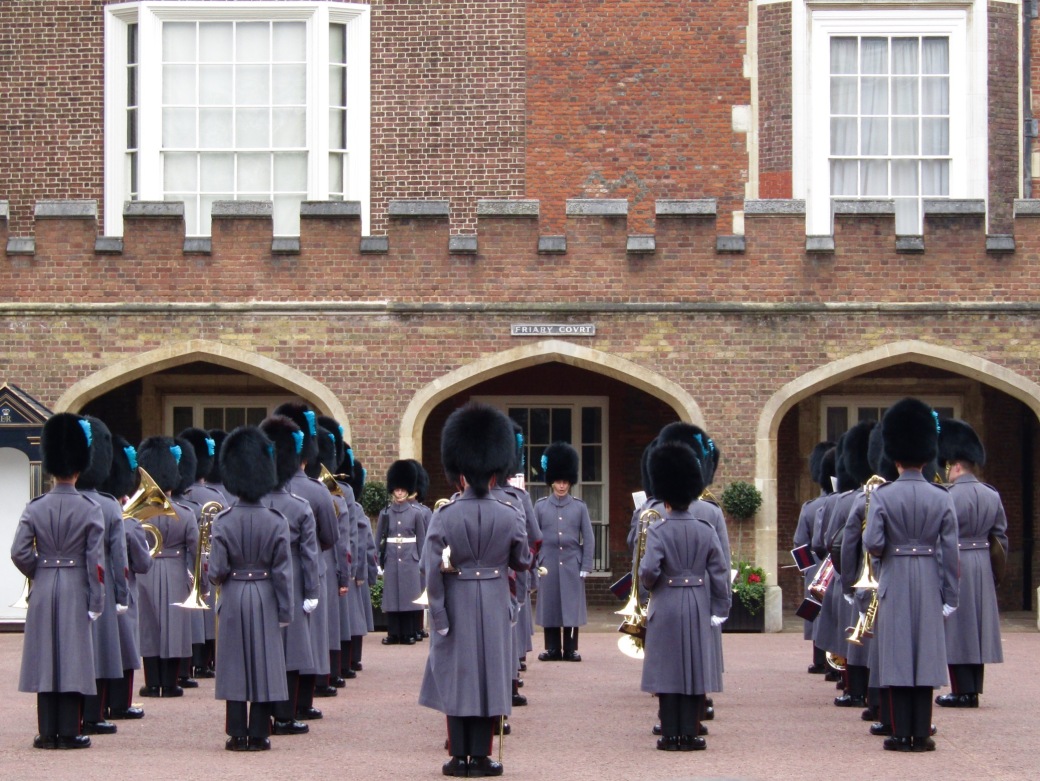 The Buckingham Palace Household Troops assemble in Friary Court at St. James Palace in preparation for the changing of the guard ceremony. 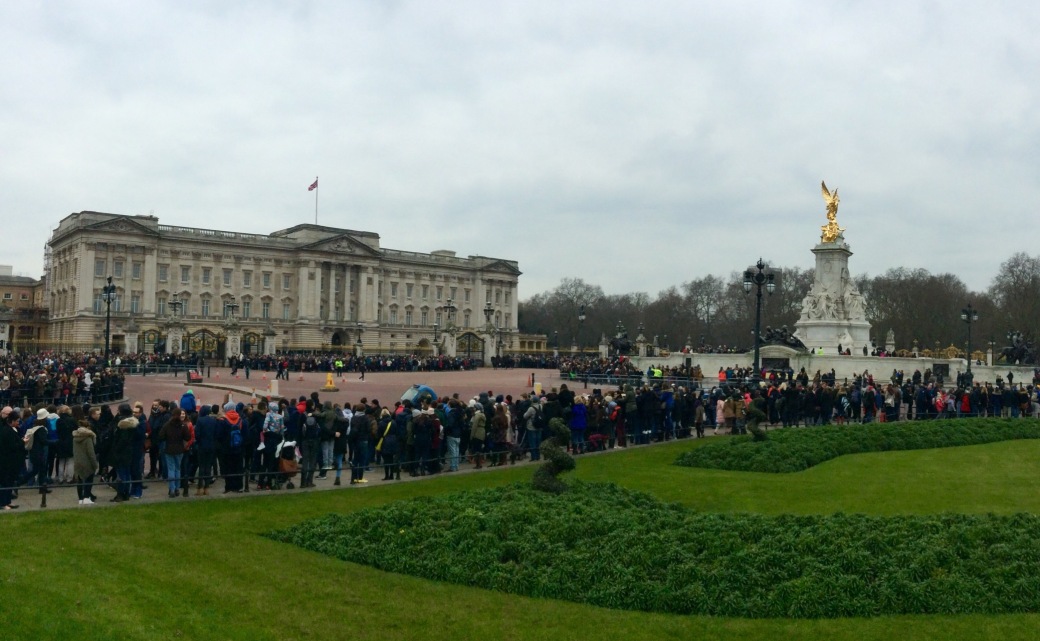 Buckingham Palace and the memorial to Queen Victoria. 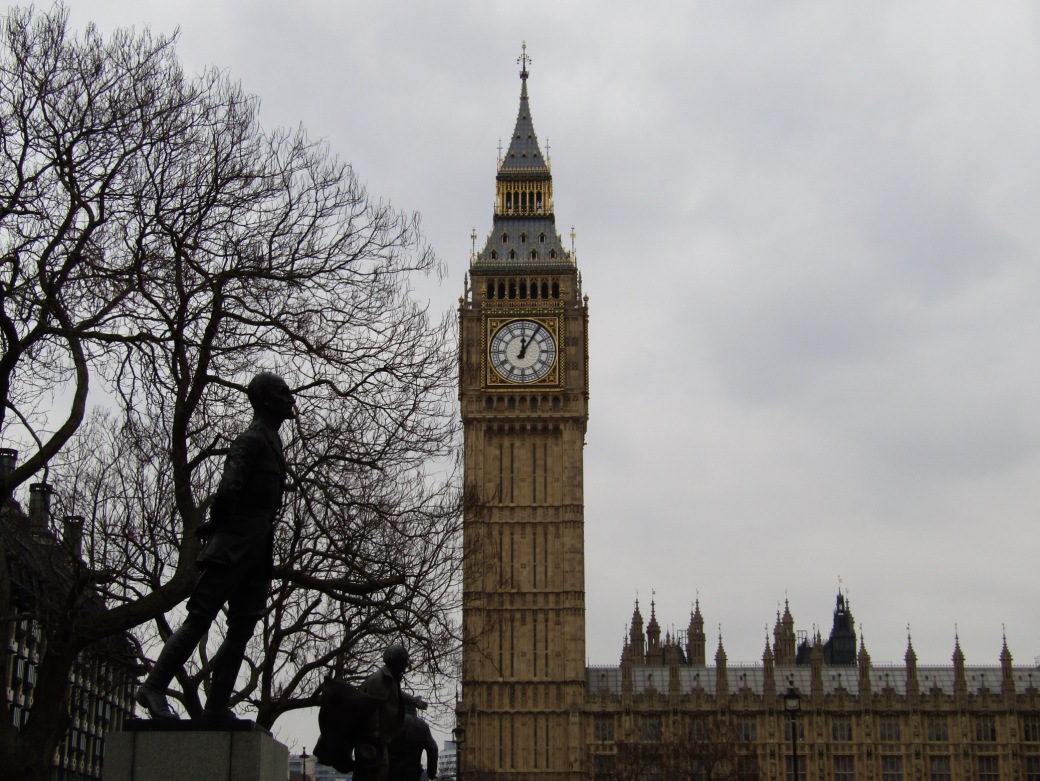 417 years later, the Globe Theater is still home to Shakespeare’s best works. The current version however is just 19 years old.

The colorful houses on Portobello Road in the funky Notting Hill neighborhood.