Who would have guessed one of the coolest things we’d see in Hiroshima is a corporate car museum? Unbeknownst to us, Hiroshima is home of the Mazda Motor Corporation’s world headquarters and the company offers free tours of its in-house museum and assembly line. 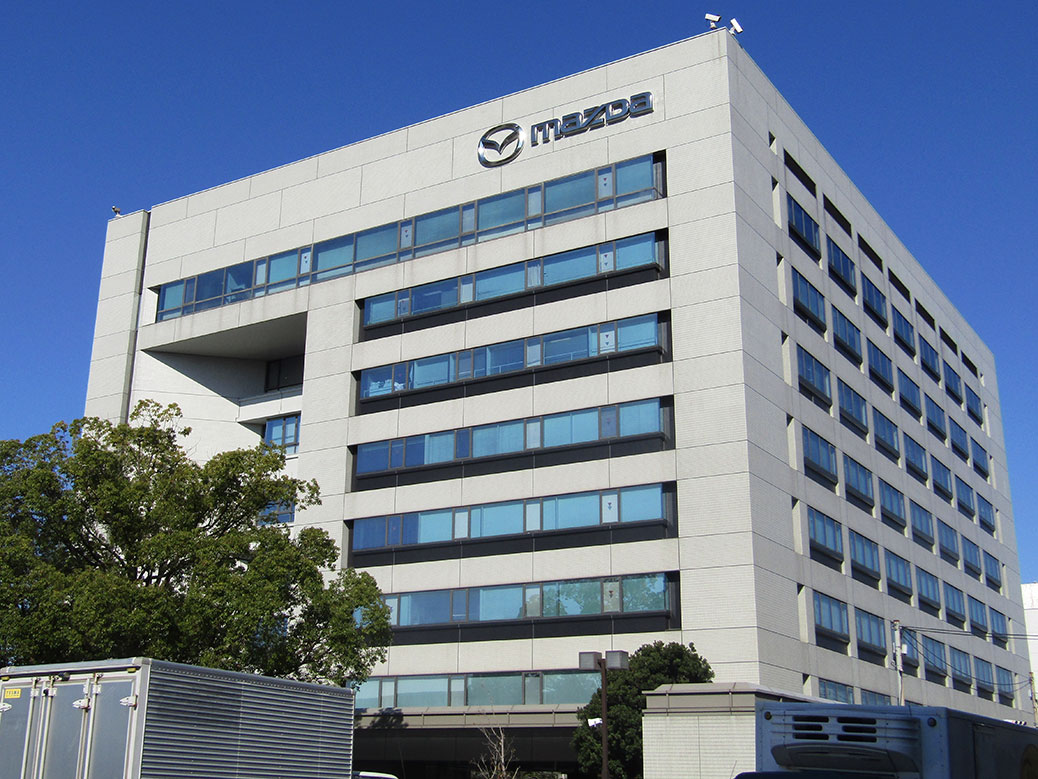 Mazda World Headquarters in Hiroshima along the Enko River

The multi-story gray office building isn’t overly impressive from the outside. Inside, the lobby shines with that showroom look you’d find at most auto dealers. The 2016 model cars are all on display in the showroom; the new tire smell permeates the air and takes me back to my days washing cars at the Honda dealership the summer before college.

The waiting tourists ooh and ahh over the cars, each coated in Mazda’s sexy Soul Red paint job. Details about each vehicle are projected onto the floor, giving the experience a high-tech feeling. Everyone wants to take a turn sitting in the sleek 2016 Mazda Miata Roadster.

We’re told we’ll be taking a bus to the museum. It turns out the drab gray office building is just the trailhead to the main event.

On the bus to the museum. We shortly learned that no photos were allowed on the bus or in the factory, so technically this is an illegal selfie.

Our guide gave a quick overview in English as we made the five-or-so minute trip to the museum entrance. The headquarters and factory are a small town within a town, complete with apartments for employees and its own private bridge crossing over the Enko River. 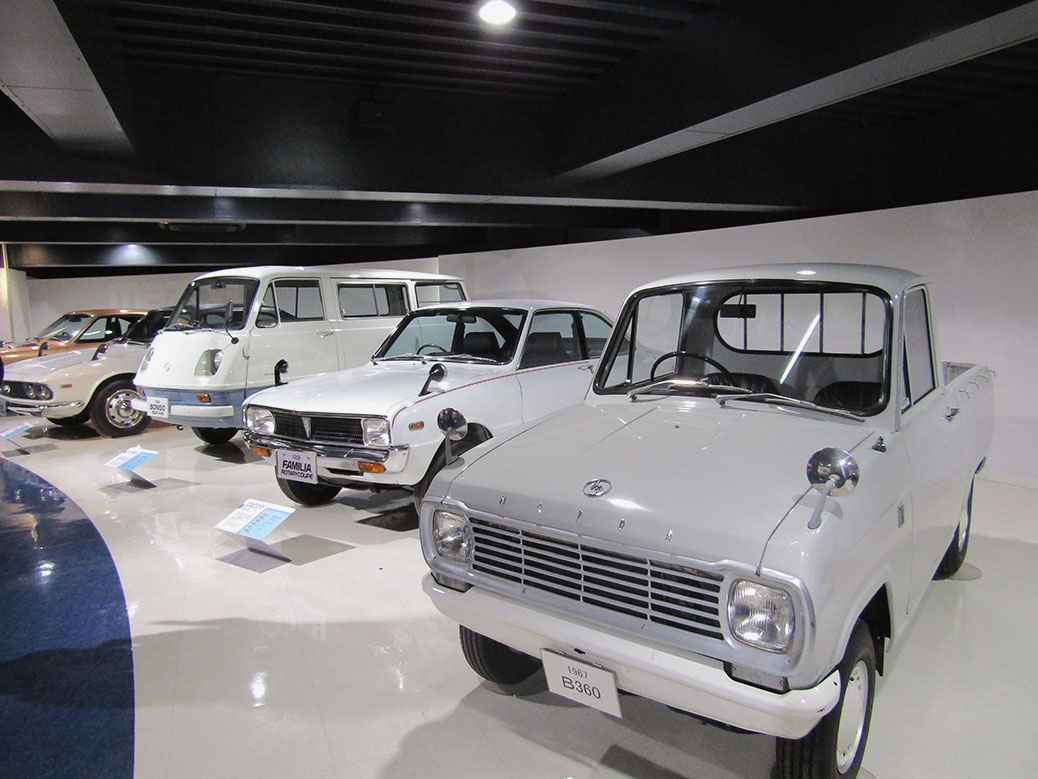 Some of Mazda’s original models, including one of its first pickup trucks and the Familia, the forerunner of the Mazda Protege

We watched a short film on the history of the company. Mazda started out as Toyo Cork Kogyo Co., Ltd in 1920, a struggling manufacturer of artificial cork. Jujiro Matsuda, Mazda’s founder and a wealthy water pump magnate, took over management of the company and turned its focus toward tool manufacturing.

The Mazda-go was the company’s first vehicle and changed Mazda’s focus from tool manufacturing to vehicle manufacturing.

In 1931, the company now known as Toyo Kogyo released its first vehicle, a three-wheeled motorcycle with a truck bed called the Mazda-go. It was sold under the Mitsubishi name and featured a unique combination of the Mazda name over the Mitsubishi three-diamond logo on its gas tank. The success of the trike sent the company down a new path—vehicle manufacturing.

After the end of World War II, Toyo Kogyo played a major role in the rebuilding of Hiroshima; its own factory heavily damaged by the bomb. The appearance of the Mazda-go around town in the days after the bombing was a boon to the city’s morale.

Over the years, the company continued to produce new vehicles with the Mazda branding, but it didn’t officially change its name to “Mazda” until 1984.

The 787B won the 24 Hours of LeMans race in 1991, the first and only Japanese manufacturer to win the race

The future of Mazda—its electric and hydrogen-powered concept vehicles

Our favorite part of the museum was one of the places photography was strictly prohibited—the factory floor. The massive assembly line pumped out vehicle after vehicle, using a combination of robots and humans to accomplish individual tasks. Dashboards were installed at one station and the windshield at the next. Large claws—like you’d find in a arcade UFO Catcher game—lifted the vehicles to another station where the engine would be raised into the vehicle from below.

I could have stayed there all day, impressed more by the amount of engineering that went into designing the assembly line itself than the vehicles it was building.

The small-scale clay version of the CX-series crossover SUV

A clay model of the interior of the CX-series crossover

A full-scale plastic model of the CX-series crossover, built to get a good look at the vehicle’s aesthetics before production begins.

Back in the museum, we saw some of the artifacts of the design process. Once a vehicle design concept has been created, clay artists build scale models of both the interior and exterior. Once the design is approved, a full-scale plastic version is created, giving a better sense of some of the manufacturing issues that might be encountered.

Just before returning to the bus, we were taken to a window overlooking Mazda’s private port. We saw massive parking garages outside, full of recently-completed cars and SUVs. They’d be driven onto the waiting ships in the port to be taken to other parts of Japan as well as overseas. If you drive a Mazda, there’s a good chance it started its life right here in Hiroshima.

A map of Mazda’s factory campus in Hiroshima

Reservations to visit the museum can be made online up to a year in advance, but we made ours just a couple days before. The tours only run Monday-Friday and the English tour starts at 10 a.m. The museum is easily reached by train from Hiroshima Station.

If you can’t make it all the way to Hiroshima, Mazda has partnered with Google to make parts of the tour available via Google Street View. You can see the Entrance Hall, the History wing, the Rotary Engine wing and the Technology/Future wings of the museum. Alas, to see the best part of the tour—the assembly line—you’ll have to visit in person.