Finding really good beer in Japan can be a bit of a crapshoot. We’ve learned to tolerate the mass-produced lagers and rejoice in the discovery of good local craft beers. This makes it hard to pass up events like this week’s Keyaki Autumn Beer Festival in Omiya, Saitama.

If you’re in the Saitama area, the festival continues through September 23, 2015. Check out the excellent Beer Tengoku blog or the Keyaki Festival site (Japanese only) for more details.

Over the course of a couple hours, we worked our way through several quality Japanese and American beers. Enjoy the rundown!

The Cascadian beer market is flooded with pumpkin-infused beers this time of year, but despite the popularity of kabocha (Japanese pumpkin) in cooking, it doesn’t seem to make its way into brewing recipes. Fortunately, one of the importers brought some Night Owl Pumpkin Ale from Elysian Brewing in Seattle. The Night Owl is how I want pumpkin beer to taste—like someone dumped a pumpkin pie into a good quality ale. Elysian uses 150 lbs. of pumpkin in each batch and flavor it with traditional pumpkin pie spices. The result is magic.

In the category of “go big or go home,” our next beer was an 8.1% ABV 115 IBU Imperial IPA from Spokane, Washington’s NoLi Brewhouse. The Jet Star IIPA dry-hops Chinook and Cascade hops to give that extra piney flavor and just enough citrus to balance the bitterness. We tend to give IPAs preferential treatment since they’re so hard to come by over here, but this one really hit the spot. The high IBU makes it a slow-drinker, which gave us plenty opportunity to be discerning about our next choice. 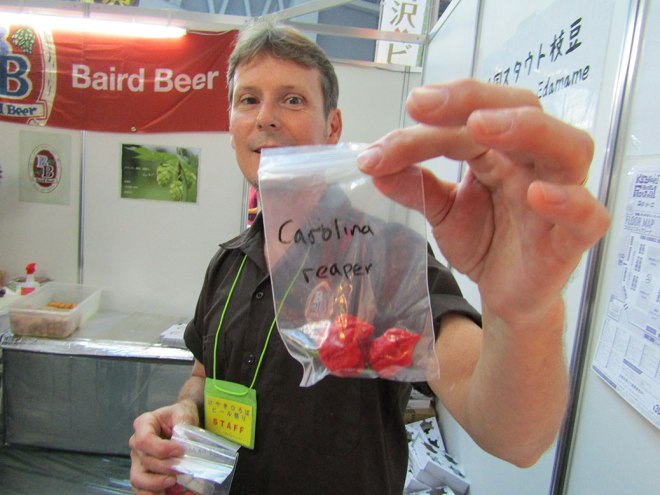 We didn’t try Baird’s beers this time around since they have easily-accessible tap houses throughout the Tokyo metro area, but we did sample some of the hot peppers they scored at the festival. We did NOT try the Carolina Reapers; the reigning champion for hottest pepper on the planet coming in at 2.2 million scovilles, six times hotter than a habanero pepper.

The guys at the Echigo Beer booth were lonely

The guys at the booth for Japan’s oldest microbrewery seemed a little bored when they waved us over and asked us to try their Koshihikari beer, made from Koshihikari rice, the most expensive grain in Japan. They even poured a very generous sample while waiving the 500 yen (about $5 USD) price tag. This was one of the more unique beers of the day and really held its flavors coming right from the tap. The lager itself was very light and refreshing, but the rice gave it an earthiness that was surprisingly pleasant. I’ve read mixed reviews about the canned version, but I enjoyed the draught version quite a bit.

I was empty-handed and the word “smoked” jumped off the sign at Outsider Brewing’s booth. Served by owner Mark Major himself, the smoke flavor of the small-batch special came through right away, making me want to chase it with some gouda and bread! The more I drank, the less pronounced the smokiness; I’m not sure if I just got used to it or it dissipated. But, I’m still saying “love it” for the first several smoky, malty goodness sips.

By the time we made it to Chateau Kamiya’s booth, we were teetering on done; both full of beer and a little fuzzy. The Ibaraki-based brewery/winery/gardens offered a little palette cleanser in the form a seasonal 3% ABV Cranberry Lager. Light, tasty and a perfect break for what was still to come.

I have a soft spot for Kanagawa’s Shonan Beer thanks to the Orange IPA we enjoyed last fall in Osaka. The Lemongrass Hopper looked intriguing, infusing local ingredients into what I knew would be a good beer base. The lemongrass and wheat flavors really came through without being overpowering. A good penultimate beer for the day.

Our last stop was a personal one—the booth of the aforementioned importer who turned us on to Yellow Ape in Osaka and let us know about this festival. Unfortunately, he was out and about when we stopped, but fortunately they still had beer! It seemed fitting to wrap up our day with some home cooking and Oregon’s Breakside Brewery’s IGA seemed the perfect end to a perfect day. Originally brewed as a partnership with Eugene, OR’s Ninkasi Brewing and typically a spring seasonal, this double IPA gets tropical notes from Mosaic, Eldorado and Chinook hops while balancing the piney notes without overpowering. The 8.1% ABV was officially the death knell for our day at the festival, but what a way to go!

The Power of Fireworks