We spent our last day in Ho Chi Minh City doing a makeshift walking tour, including the Ho Chi Minh statue in front of the People’s Committee building. Built in 1909, it was modeled after the City Hall building in Paris. It’s still a working government building today. 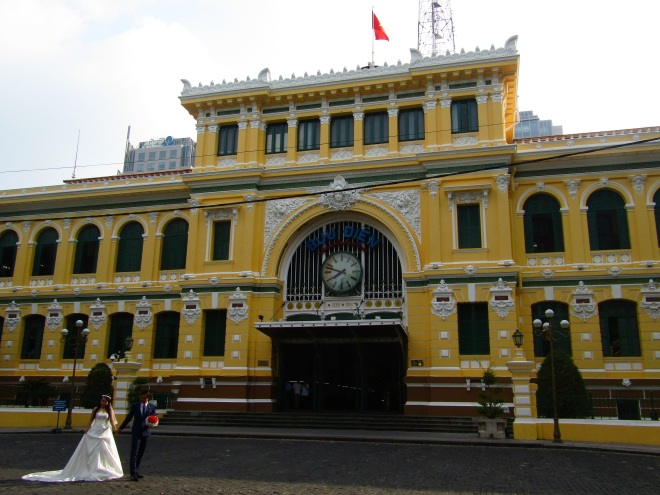 One of many couples taking wedding photos in front of the iconic Saigon Central Post Office. It was built by the French in the late 1800s and is still an active post office in addition to being a popular tourist site. Architect Gustave Eiffel, famous for Paris tower that bears his name, was among those who designed the building.

The epic Saigon Notre-Dame Basilica is directly across the street from the post office, offering a two-for-one sightseeing experience. The church itself was completed in 1880, but the current Our Lady of Peace statue was installed in 1959. In 2005, the statue was in the news when it was reported to have shed tears, although the local clergy weren’t able to verify the event.

Finding breakfast on the streets of Vietnam is simple. Step 1: Find a banh mi stand. The bread is always fresh in the morning and there’s nothing like a deep-fried egg to get your day started.

Step 2: Find yourself a ca phe sua da (Vietnamese iced coffee) vendor. This lady might have made the best one we had on the entire trip despite a very makeshift operation on the sidewalk.

Students in HCMC outside their school on a Saturday. The school week is six days long, but there was extra activity as they celebrated the beginning of a new school year with loud music, loud speeches and general loudness.