Over the course of a month of traveling, you’ll end up using a lot of different types of transportation. Obviously, there’s a bunch of taxis and buses, but southern Asians use a variety of different transportation methods as part of their daily lives. Here’s a sampling of how we got around India, Nepal and Thailand. 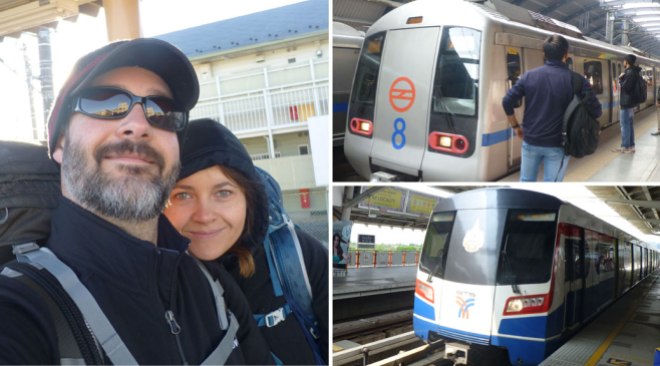 Clockwise from left: Waiting for the metro train in Kawagoe; The Delhi Metro; Bangkok Metro (MRT)

We had five flights on our trip: Tokyo to Delhi, Kathmandu to Bangkok, Bangkok to Koh Samui, Nakhon Si Thammarat to Bangkok and Bangkok to Tokyo

We took a pink taxi in Bangkok similar to this one (Photo by Ilya Plekhanov, Wikipedia Commons)

Tuk-Tuks or auto-rickshaws are a common way to get around in southern Asia. We used them frequently in India and Thailand. 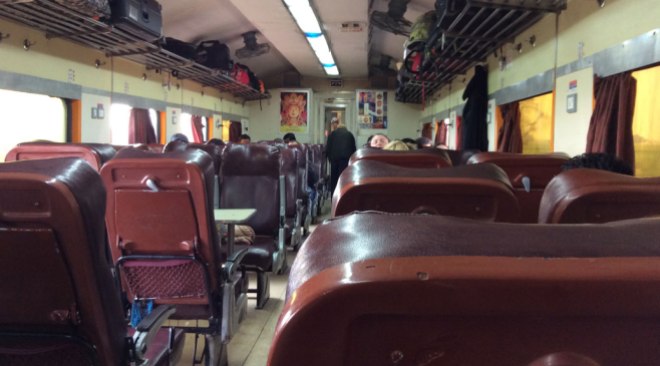 Business class seating in a passenger train from Agra to Jhansi in India. Pretty comfy and clean. 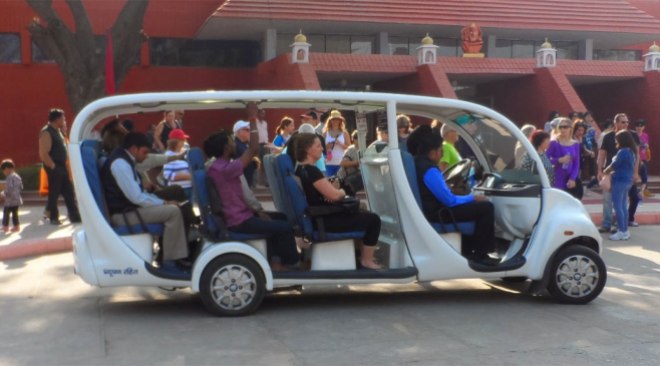 Only electric vehicles are allowed near Taj Mahal as the pollution was beginning to turn Taj’s marble yellow. We rode a cart similar to this one to the gates (Photo from jotarofootsteps.blogspot.com) 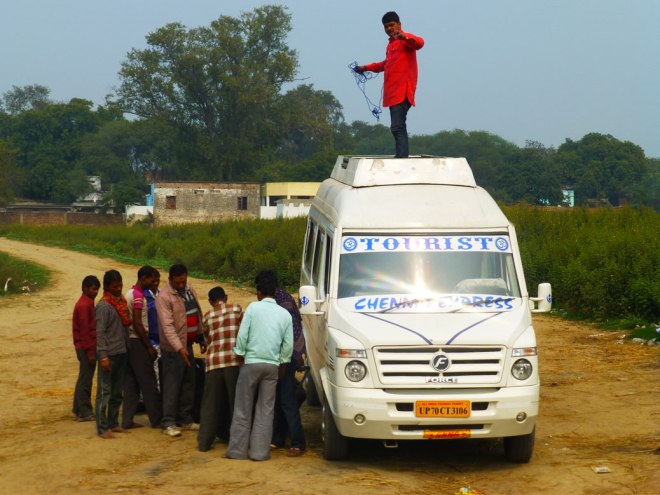 In India and Nepal, our tour group used private buses and vans to move shorter distances. Usually our luggage was tied to the top and usually someone climbed on top of the van to get it down.

Inside the horror show that was the sleeper train from Orchha to Allahabad in India. A group of men argued loudly all night in the bunk across from us. (Hey Farren!) 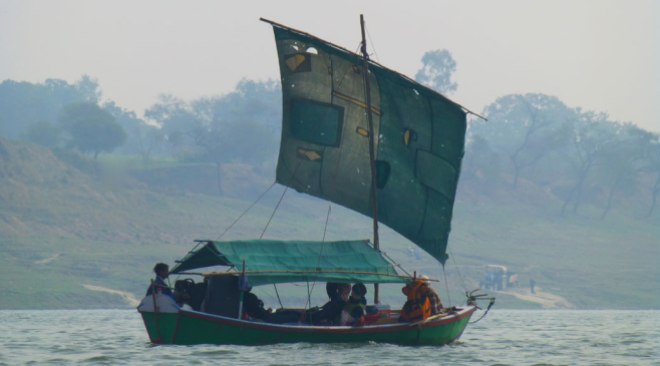 On the Ganges River in Allahabad, we drifted in sailboats to a remote beach where we camped and played cricket. 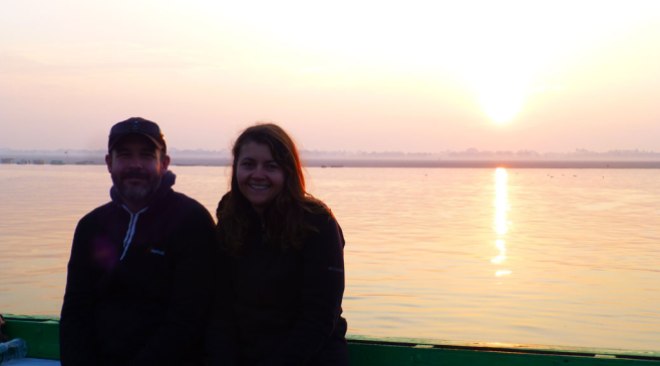 In Varanasi, India, we used motor boats to watch the sunrise opposite the city’s famous ghats. 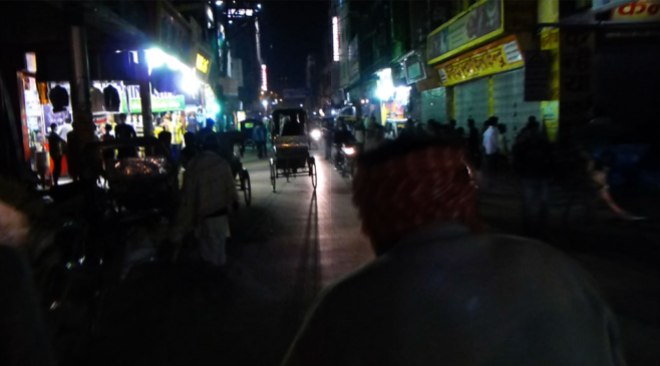 Riding a bicycle rickshaw in the streets of Varanasi, India. We felt bad having another human being peddle us around, but it was better than having to walk back to our hotel.

We rode a bus to the India/Nepal border, then crossed the border on foot before boarding another bus to our hotel in Lumbini, Nepal

In the Narayani Zone in Nepal, we toured the local village on bicycles. We both got a “Hero Queen” bike.

In Chitwan National Park in Nepal, we saw one-horned rhinoceros and crocodiles from our safari jeep

In Koh Samui, we rented a scooter for the day and poked around the east side of the island. Later, in Nakhon Si Thammarat, we rode on the back of scooter-taxis to our songthaew to Kiriwong Village. 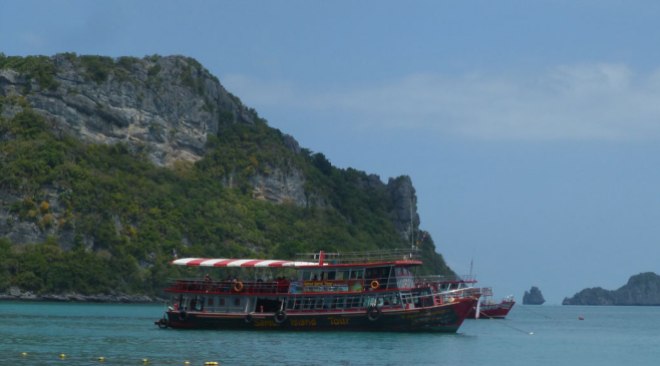 To reach Thailand’s Angthong National Marine Park, you have to catch a ride with a tour boat. We camped on Angthong’s main island for a couple nights and returned with another boat.

Both days we were on Angthong, we rented a kayak and paddled out into the Gulf of Thailand 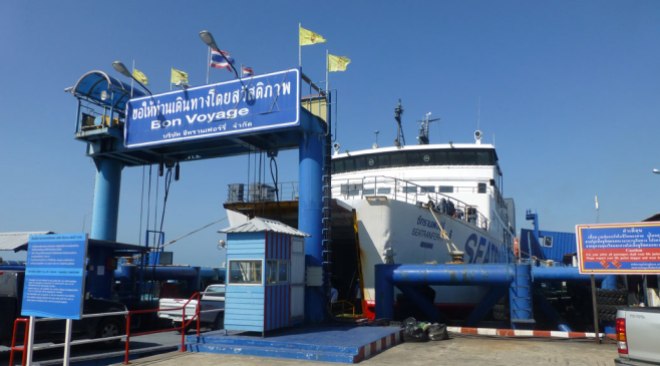 We finally pried ourselves off of Koh Samui and took a large ferry boat to the mainland. Dozens of cars sat below deck. Above deck, comfy seats, televisions, massage services and a convenience store were available for passengers.

Songthaew‘s are one of Thailand’s primary public transportation methods. The modified pickup trucks stop along fixed routes and have padded benches in the covered truck bed. People hop on and off along the route.

Twice we rode in the back of a pickup truck. In Kiriwong Village, Thailand, a Thai from Krabi helped us set up our homestay lodging and gave us a ride to the house. 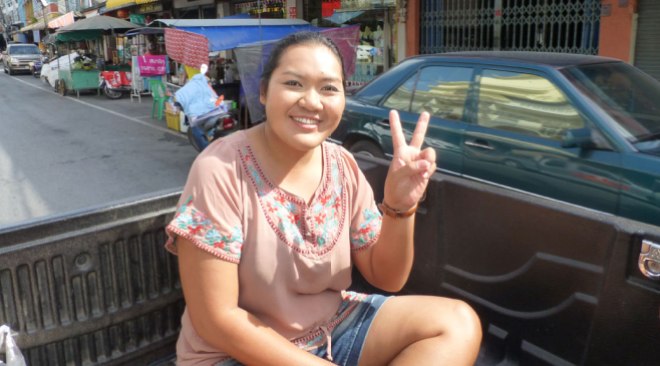 In Nakhon Si Thammarat, a woman named Joon helped us make change for our songthaew fare, then went out of her way to give us a ride to our hotel in the back of her pickup truck. Her mother was driving and stopped for a snack along the way while her two daughters enjoyed their 7-11 Slurpees. 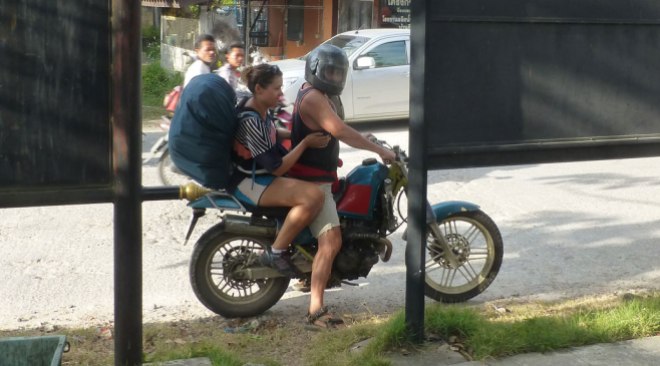 In Kiriwong Village, we hired a local guide to take us hiking to the waterfalls in Khao Luang National Park. He picked us up on his motorcycle. I wasn’t sure I’d ever see my wife again when I snapped this picture! 🙂 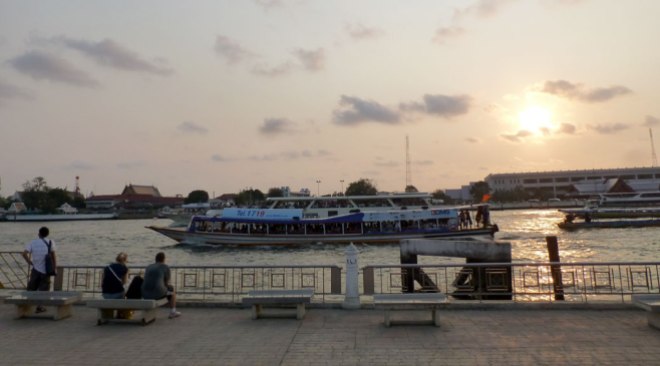 In the old part of Bangkok, water taxis run up and down the Chao Phraya River, dropping passengers at the big tourist spots. They’re crowded and the boat attendants do a lot of yelling and pushing.

What’s the craziest method of transportation you’ve ever taken in your travels? Leave a comment below!

The True Meaning of Hanami