Sampling local food, the cooking classes, street food and fresh fruit and vegetable markets were probably the highlight of our trip to India and Nepal. Check out Indian food part 1 here.

In India, our travel group attended a cooking class in a small town called Orchha. Our host spent an evening teaching us how to make some of her favorite dishes. These included masala chai, roasted eggplant, potatoes and spinach, yogurt sauce, rice pilaf, and chapati bread.

In Kathmandu, Nepal, we spent an afternoon with a Nepalese couple that runs a cooking class in a home setting. We were the only two people in the group so it was nice to be able to ask a lot of questions and do every part of the cooking—from prepping to eating! We made tea, momo dumplings, lentil soup, vegetable curry, rice, mustard greens, fry bread and rice pudding.

In both of these settings, women finally took center stage as leaders—in the kitchen. Neither of the women finished their schooling. Each had incredible stories of arranged marriage, financial hardships, raising children and becoming ‘discovered’ by tour leaders who encouraged them to make a living by showcasing their country’s food to tourists.

The meal today comes with a side of social commentary. Skip ahead to the recipes if you’re not interested. While these women make money with little to no education, most women do not. They depend on their husbands. The scales are so unbalanced in favor toward men in this society and its economy, that it’s hard to stomach.

The message I heard was, “All women can do is cook and have kids so if they can make money at the same time, why not?” Yes, women should have the ability to choose. If a woman has culinary talent and she has a desire have kids, that’s great. But if that’s her ONLY choice and she was robbed of an opportunity to further her education, which may provide her some other options, that’s nothing to be proud of.

I will also add that women do ALL of the cooking in this society. Men, when questioned, expressed no interest. Why bother when my woman does it? The women cook. Men eat first. Then, whatever is left over, the women and children eat. In Nepal, the man came to sit and eat with us while his wife cleaned the kitchen.

In most of the urban city centers, there was a noticeable lack of women. I felt eerily outnumbered at times. Where are all of the women? At home, where they belong? In the Delhi Metro, women are assigned to ride in a separate car. This is similar to Japan and I understand the reason—to avoid sexual harassment. (Side note: I’ve never had a problem in Japan, or India for that matter. Maybe because I’m white and traveling with a big ol’ man to protect me.) Anyway, the separate car is not my issue. The issue is out of the whole entire train, just one car is for women and it was barely full at rush hour while the men in our group were packed shoulder to shoulder in their car. Where are all of the women in the middle of the workday?

India, instead of viewing women (half of your population) as a deficit, find a way to see them as an asset. Both genders working=everyone wins. The International Monetary Fund is working on an initiative to equalize pay for men and women. It states India needs, “… to boost presently low female labor force participation.” Source.

I understand that’s my privilege as a white, educated, Western woman to have these ideas and that not everyone agrees. I don’t pretend to know everything and I don’t want to make light of these women’s accomplishments. Changes are made slowly within the norms of each society. At least the men in both of these situations have some realization that their wife has earning power. Small steps for womankind.

I’ll get back to the food. Below is my adaptation of Vandana Dubey’s recipes of Aloo Palak and chapati. 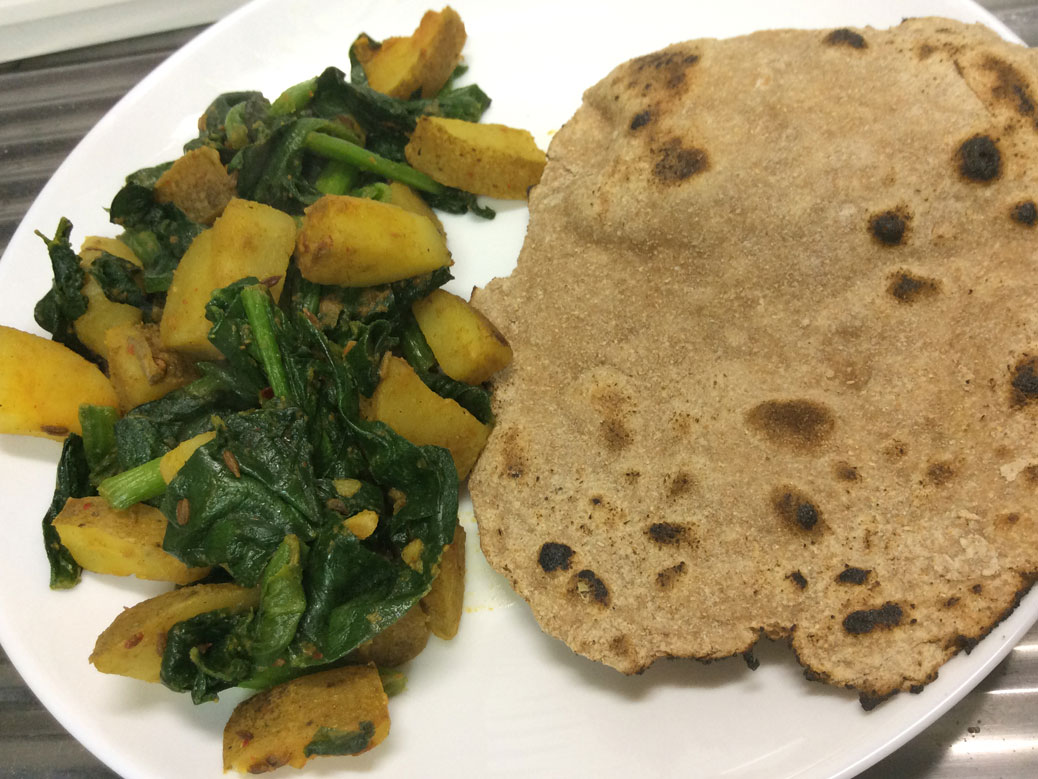 Step 1: Steam or boil the diced potatoes for about 5-7 minutes. You want them pretty done—firm, but not falling apart. Like you’re making potato salad. Set these aside.

Step 2: Heat oil in a large sauté pan and then add cumin seeds, garlic and chilies. (We don’t have fresh chiles in Japan so I used dry ones that I let hang out in some boiling water for a few minutes.) Fry for 1-2 minutes on medium high heat. Don’t let your garlic burn…you are infusing the oil with flavor here.

Step 3: Add your potatoes and the salt, turmeric, chili powder and coriander/cumin. Stir and incorporate all of the spices.

Step 4: Add the chopped spinach and toss about. You just want to wilt the spinach here for a couple of minutes. Don’t overcook.

Step 5: Turn off the stove. Enjoy! Serve with rice or chapati. We also had some raita, or yogurt, to take the edge off the spice.

Note: You can adjust the chiles and chili powder to your liking. Same with the salt.

Sift flour onto a flat plate and add salt.

Sprinkle water onto flour and knead into a smooth dough.

Fry chapati on a flat, unoiled frying pan for about a minute on each side, then place bread directly on gas flame until it begins to puff up. Repeat on other side.

Below is a video of Viktoria making chapati with Vandana.

Everybody, This is India… India, Meet Everybody