On our second day in Rome, we tried to visit as many of the must-sees as we could, including the famous Trevi Fountain.

The 86-foot tall fountain was built in the 1700s as part of a design competition sponsored by Pope Clement XII, a popular Baroque-era method for designing the magnificent structures of Rome. The fountain took more than 30 years to complete and the architect, Nicola Salvi, died before it was finished.

It’s estimated that more than 3,000 euros are thrown into the fountain every day. The funds have been used to build a supermarket offering basic items for free to families in need. 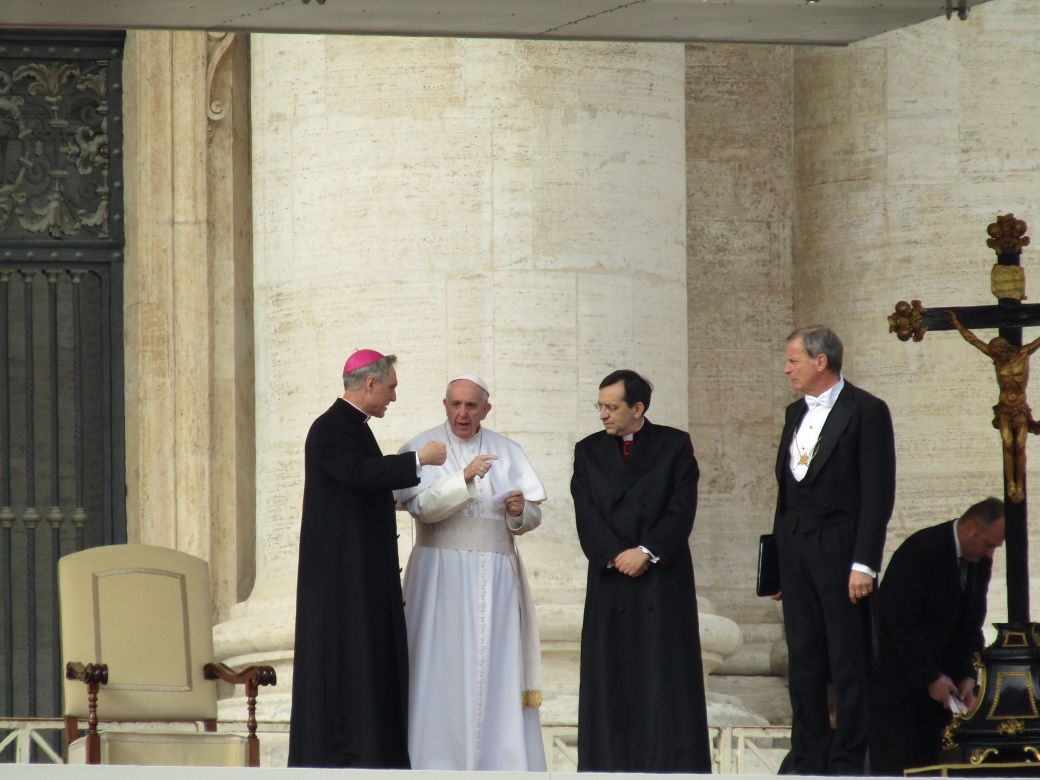 Pope Francis greets the Vatican cardinals following his weekly Wednesday audience with the general public. After the service, the Pope waded into the crowd as they chanted his name. 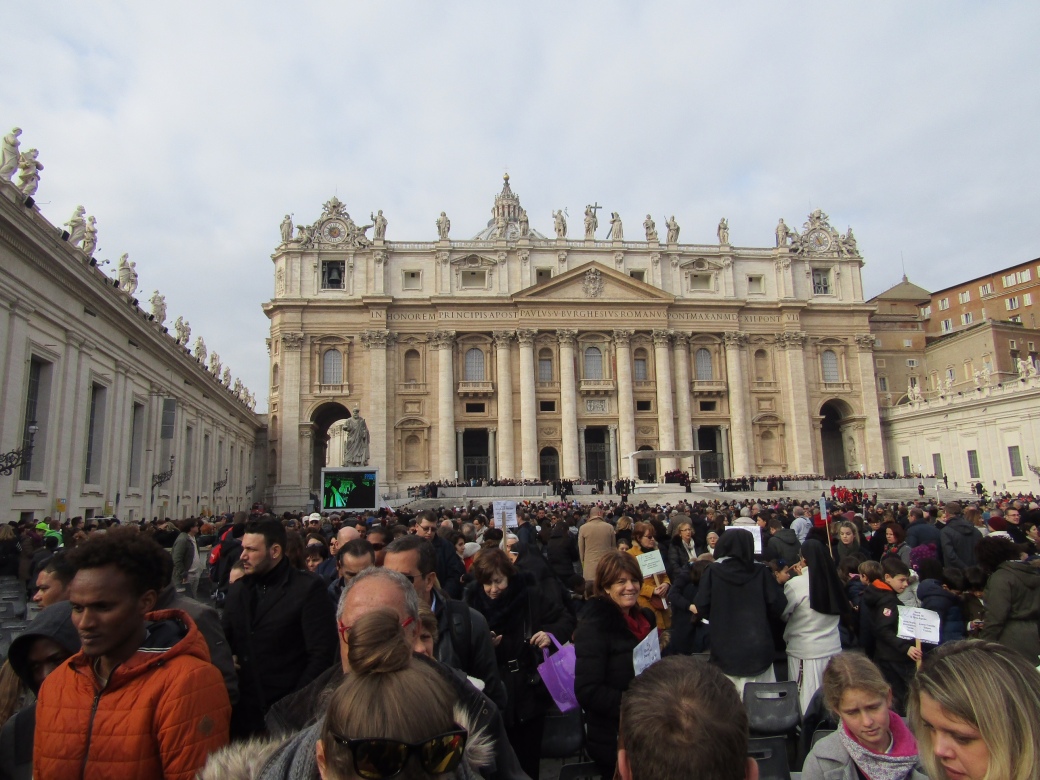 St. Peter’s Basilica as seen from Via Dei Corridori. I love the optical illusion of the street lamps “bending” down the street. 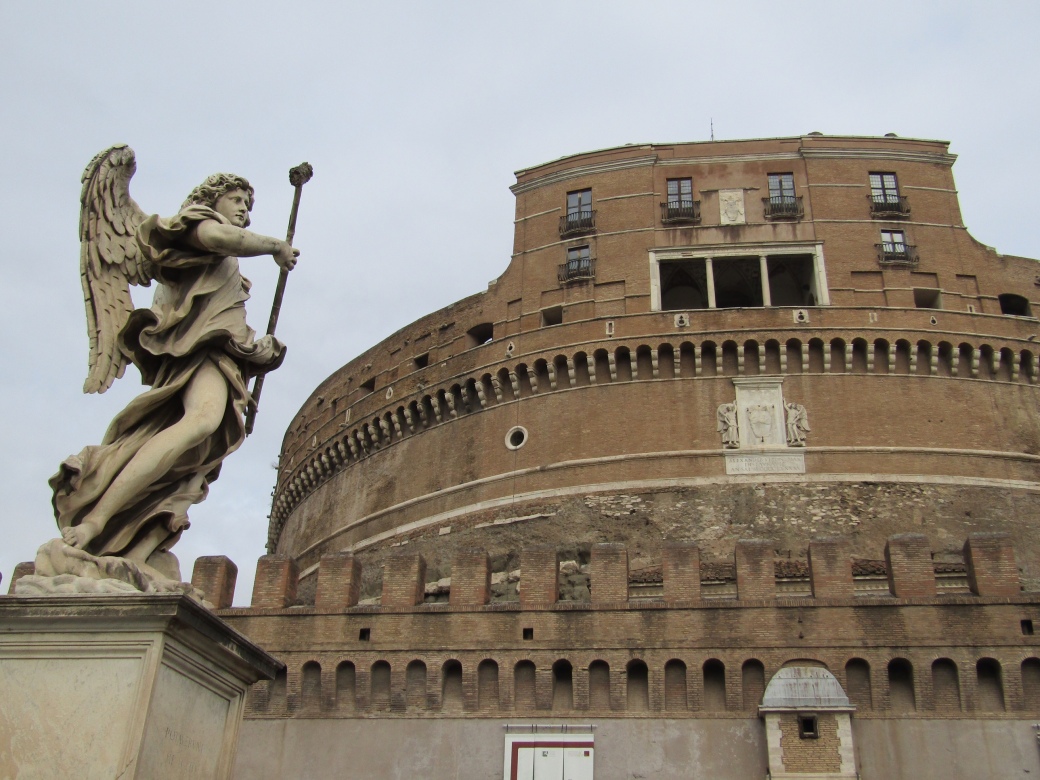 One of the angel statues lining the Ponte Sant’Angelo bridge leading to the Castle of St. Angelo. The castle was built in the second century as a mausoleum for the Roman Emperor Hadrian. Over the last 2,000 years, it’s served as a military fortress, an emergency Papal residence, a prison and now as a museum.

Built in the 1700s, the Spanish Steps link the Trinità dei Monti church to the Plaza of the Spanish Embassy to the Vatican at street level. Usually a popular hang out space for Romans and tourists alike, the steps are currently closed for restoration due to wear and tear from all those tourists. Luxury jewelry brand Bulgari is footing the bulk of the restoration bill.

Trinità dei Monti is an excellent example of Italian Renaissance architecture. During Napoleon’s occupation of Rome, many of the church’s adornments were damaged or looted. The church was restored at the expense of French King Louis XVIII in 1816. Among the works inside is this sculpture called Deposition by German sculptor Wilhelm Achtermann depicting the descent of Jesus from the cross.

The streets of Italy’s largest city are still paved in cobblestone. Locally, the stones are known as “SanPietrini,” or “Little St. Peters.” The name most likely came from the stones first appearing in St. Peter’s Square, but local legend says there’s one cobblestone for every soul saved by St. Peter. If that’s the case, that’s a lot of souls!

A typical Rome apartment building. The disrepair of the outside is quite beautiful, fitting into the rustic look that dominates this ancient city.

A restored Italian coupe parked in an alley in the Trastevere neighborhood. The district retained its distinct old world charm due in part to its separation from the rest of Rome by the Tiber River.

Closing time in a shop near the Campo de’ Fiori market.