The changing of the seasons in Cascadia are marked by important events. We know springtime is right around the corner when you spy someone in a t-shirt, shorts and flip flops on a sunny day even though it’s only 42 degrees outside. The beginning of fall is accompanied by talk of Ducks and Beavers while waiting in line for a Starbucks Pumpkin Spice Latte.

In Japan, each new season is marked by the blooming of flowers. Cherry blossoms and wisteria in the spring, irises and hydrangea in the summer and now red spider lilies are popping up in gardens all over town. 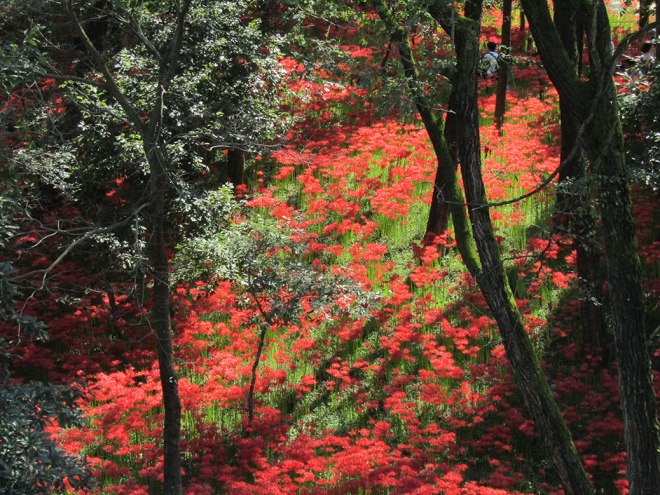 In nearby Hidaka City, an annual festival is held at Kinchakuda-Manjushage Park along the Koma River to celebrate the blooming of the lilies. The vibrant red flowers are in strong contrast to both their spring-green stems and the green canopy of the meadow in which they grow.

Click any photo below to view as a slideshow. Scroll down for festival details and video from the day.

Outside the Orugon Dou (オルゴン堂) natural yeast bakery, one of the many interesting buildings in old Hidaka.

Every once in awhile, a white lily would poke its head out amongst its red brethren.

Many people took advantage of the beautiful weather and scenery to spread out a picnic.

First stop was lunch at Alishan Organic Cafe, one of our favorite cafes in Japan. Choosing from a smaller festival menu to handle all the visitors, we had donburi and seasonal veggie curry. It’s right next to the park, so if you visit the festival, check out Alishan!

A young girl feeding grass to one of the horses at the neighboring farm. The farm is right on the edge of the park and is open to the public during the festival for rides and pets.

Looking out over the meadow of lilies.

Thanks to the passer-by who snapped a photo for us. It almost looks like there’s nobody else there…

A view of the Koma River with red spider lilies growing beside the bridge.

The path winds through the middle of the flowers, letting visitors get right up close and personal.

Looking out over the meadow of lilies.

Several cartoon-style dolls were arranged beside the path near Koma River. Everyone with a camera stopped to snap some photos of the very strange, yet also very Japanese, scene.

Captured with the GoPro, this horse would do a lap around its pen, returning back to the rail to see if anyone had brought a treat. Usually a child with a carrot or grass wasn’t far away.

Local food, beer and crafts a plenty at the Kinchakuda Festival in Hidaka City, Saitama.

One of the many jangseung (Korean totem pole) found throughout Hidaka. The city has a long history with Korea, dating back to the settlement of refugees in the 8th century.

This pair in full costume were being filmed both by a professional photographer and videographer. In 2014, a dozen films and television shows were filmed in Hidaka City.

A large black swallowtail butterfly was a popular target for the point-and-shoot photographers.

The girl has a “you’re kidding me, right?” look about feeding her carrot to the donkey.

The Kinchakuda Festival (website in Japanese) runs every weekend from now through October 4, 2015. They have lots of great local food vendors, live music and the nearby farm offers horse rides and a petting zoo.

A Fruitful Day in Ogawa