If you’ve followed Cascadian Abroad for the last couple years, you know we missed our Oregon craft beers during our time overseas. We did our best to fill the gap. We explored Japan’s growing ji-biru scene. We visited Prague with its world-class Pilsner and London, where IPAs, porters and stouts reign supreme. We bellied up to the bar in Brussels where wild yeast defines most styles. We even stumbled on two separate craft brewpubs in the hutongs of Beijing.

Yet, I can honestly say nothing tops the creativity and quality found here in Cascadia where the process is just as important as the product. Homebrewers with a dream have started some of the Pacific Northwest’s most successful small breweries. Obsessive detail is paid to everything from the ingredients used to the origin of barrels and other materials used in the brewing process.

Over the past month, we’ve revisited a few of our favorite places, tried a few new breweries and have even been treated to some unexpected tours. Here’s a small sample of some of the best Oregon has to offer.

Salem’s Santiam Brewing started with a group of buddies experimenting in a small room in the back of an industrial park. Four years later, they’ve taken over most of the park, opened a large tasting room and are in the process of expanding even more.

We visited on the one day a month co-founder Matt Killikelly happened to be behind the bar and were treated to a tour of the operation. It’s a beautiful harmony of professional brewing and DIY ingenuity. Gleaming stainless steel fermenters fill one room while the large storage cooler—hand-built by staff—takes up another. Original equipment made from picnic coolers and fish tank parts now sit in the warehouse like museum artifacts.

Santiam—named for the North Santiam River that provides the brewery’s pristine water source—now has an impressive barrel-aging warehouse. Rum barrels from Jamaica give the amazing Pirate Stout its distinct sweet flavor. Other beers are aged in Tennessee whiskey barrels while Santiam’s new line of sours with their strains of wild yeast are tucked away in the back.

Rogue Ales and Spirits is one of Oregon’s most successful craft breweries. Its flagship beers have wide distribution (we easily found bottles in Japan), but the real spirit of Rogue can only be found close to home.

Fresh from the farm bottles and kegs at Rogue Farms in Independence, Ore.

The Rogue Farms 8-Hop IPA at the farm in Independence, Ore. Rows of Rogue’s proprietary hops can be seen growing in the background.

Nestled along the banks of the Willamette River in tiny Independence, Ore., Rogue Farms is the core of the brewing operation. The long road to the tasting room is lined by acres of proprietary hops with names like Rebel, Freedom and Newport. Further in, groves of hazelnut trees, jalapeño plants, marionberries and pumpkins appear. Bee hives sit in the fields.

All of these are used as ingredients in Rogue’s specialty beers, brewed about an hour away on the Oregon Coast. We visited the farm on a beautiful sunny day in the middle of the week and enjoyed their farm-special IPAs at the picnic tables that surround a grassy square filled with lawn games.

While we played bean bag toss, two farm employees approached and asked if we’d be interested in a tour. The guide was a trainee and encouraged us to ask a lot of questions. We learned about the history of the farm, which has been growing hops since the 1860s, and walked through the hop processing facilities. We met the pet pigs, Voo and Doo, named for Rogue’s partnership with Portland’s Voodoo Doughnuts.

Must-try: 7-Hop and 8-Hop IPAs, Chipotle Ale. Many of the taps are farm-only offerings, so sample the seasonals!

Oregon’s Willamette Valley has earned international acclaim for its pinot noir grapes, but the prime agriculture land also yields excellent aromatic hops and resilient rye that can be found in the numerous IPAs, red ales and more in Oregon’s 220-plus breweries. Here’s a few off-the-path breweries not far from I-5. 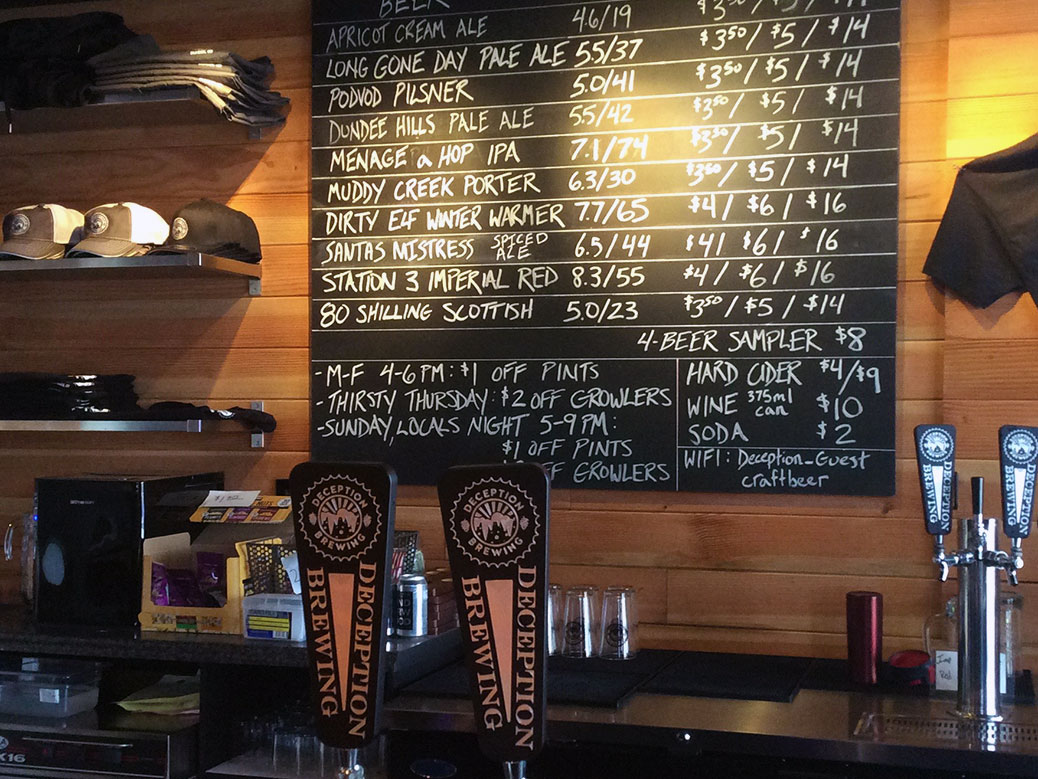 The spring tap list at Deception Brewing in Dundee, Ore.

Deception Brewing, Dundee: The small town of Dundee has exploded in the past decade thanks to several vineyards in the hills above Highway 99W. Deception is a nano-brewery offering a break for wine-soaked tourists. The small taproom features 10 of the latest brews. Try the award-winning Apricot Cream Ale or the 80 Shilling Scottish Ale.

Grain Station Brew Works, McMinnville: Sharing space with a coffee roaster in a restored barn, Grain Station embodies the agricultural spirit of its hometown. In addition to seven flagship beers, a handful of seasonals are available on draught and a large food menu draws in the locals. Try the unfiltered Sprout Hefeweizen, CDA-esque Hank’s Dark Ale or the complex Barnstormer Double Red. 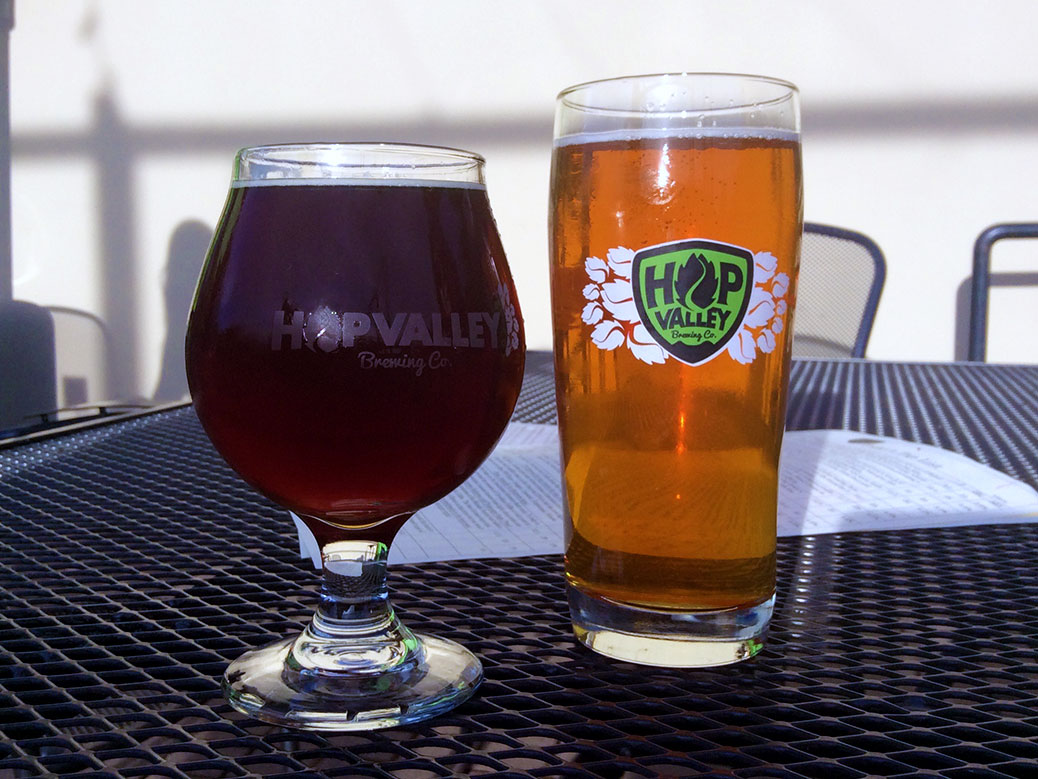 Hop Valley Brewing, Eugene: Located on the outskirts of downtown Eugene, Hop Valley’s taproom will be packed with local beerphiles any night of the week. Thanks to a growing on-site bottling/canning process, Hop Valley beers are now available in retail around the Northwest, but getting seasonal choices fresh at the brewery is the way to go. My favorite is the VIP Vanilla Porter, but also try the Proxima IPA and Redside Prophet Imperial Red Ale.

For more reviews, check out the Cascadian Abroad Beer Journal featuring craft beers from around the world.

Photo of the Day: Portlandia