The jarring beep of our travel alarm started day 35 not long after day 34 ended. It was 3:30 a.m. in London and our bus to the airport was leaving soon. A few hours later, it was wheels up for Prague.

While the weather in London was cold, there was a chill in the air when we arrived in Prague that had a different feel. A light drizzle turned into a steady shower as we set out on the capital of Bohemia.

After a filling and beautiful Czech-style lunch at Plevel, we walked into the Old Town quarter. The small Havelské Tržiště market, established in 1232, called out to us with its charming stalls and rain-deflecting awnings. Vendors sold plenty of the usual tchotchkes, but a few had beautiful paintings of various city scenes made by local artists. If not for the weather, we would have gladly packed one or two away as a souvenir.

Targeted at Prague’s growing tourist market, the Old Town Square is the only part of the quarter that is still mostly unchanged from its medieval roots. The square’s main attraction is the orloj, an astronomical clock installed on the Old Town Hall in 1410. Every hour, visitors crowd in front to watch a parade of carved Apostle figures pass through two windows above the clock. The clock face shows the time, the current month and the position of the sun and moon.

Across the square, the Church of Our Lady before Tyn has been Prague’s primary house of worship since the 1400s. Much of Old Town Square was heavily damaged during World War II, in particular when the local people revolted against the occupying German forces two days before Germany surrendered to the Allies.

We crossed the Vltava River via the pedestrian-only Charles Bridge, built during the late-14th/early15th century. The bridge offers some of the most popular views of Prague Castle and the old Mala Strana neighborhood to the west. Replicas of 30 baroque-style statues carved in the 17th and 18th century line either side of the bridge. The originals can be seen in the National Museum.

As we headed toward our apartment, the rain began to mix with snow. It wouldn’t be the last we’d see of it…

The Old Town Hall peeks through a narrow alley in Old Town. 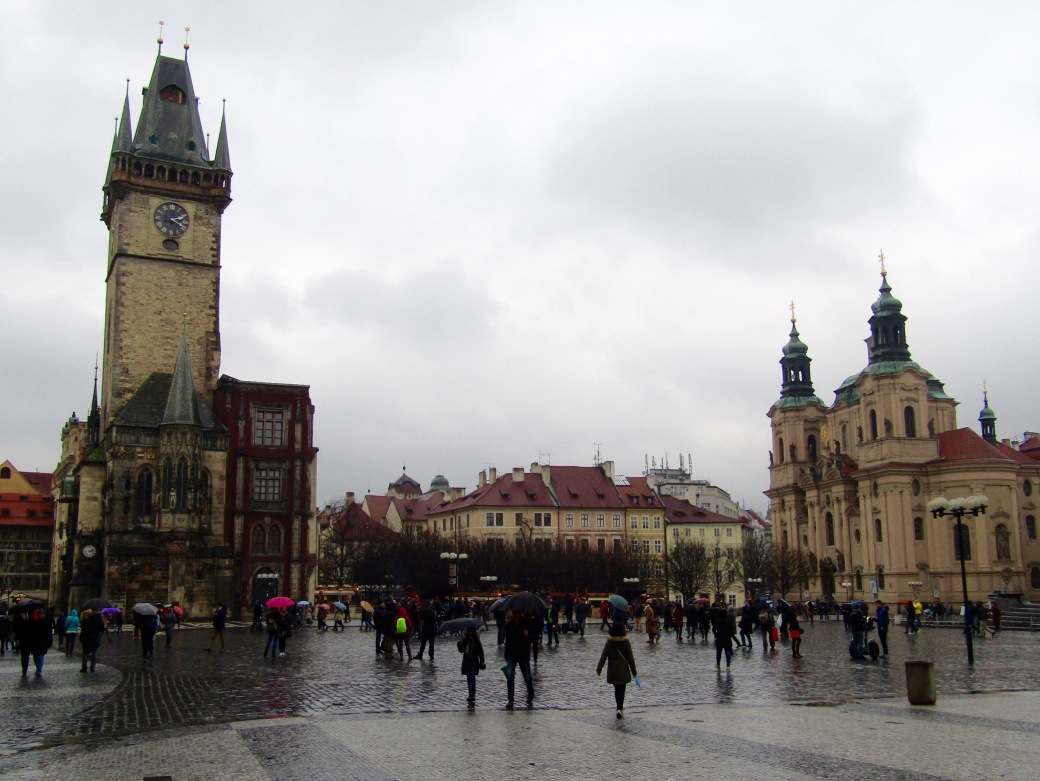 Old Town Square. The Old Town Hall is at left, the Church of St. Nicholas is at the right.

The astrological clock and the Church of Our Lady before Tyn in Prague’s Old Town Square.

Crossing the Vltava River via the Charles Bridge.