Day 12: The Palace of Versailles

Located about 11 miles outside of Paris lies a monument to the opulence of Louis XIV. The Palace of Versailles was built in 1623 for Louis XIII as a simple brick and stone hunting lodge. But during a 20-year period in the 1660s-70s, the son turned it into an ornate mansion with a very-roughly estimated budget of $2 billion US dollars in today’s money.

A simple self-guided tour is a whole day affair. In what’s becoming a theme for us, it was made longer by a morning train delay that left us stuck in Paris for an extra hour-plus. Arriving later in the morning, we joined the throngs of Saturday tourists awaiting entry.

An audio guide was provided for free, providing a lot of useful information about the various rooms while also painting a picture of what daily life might have been like for the royal family and the thousands of courtiers living on the grounds.

Versailles quickly became the center of French politics until the monarchy was overthrown during the French Revolution and upkeep of the palace was neglected. Various restoration projects during the early 1800s began to restore the palace, but it wasn’t until the efforts of King Louis Philippe I to turn the palace into a public museum that modern-day Versailles began to take shape.

We had a hard time getting good directions from our apartment in Montmartre. Every website suggested heading to the nearest RER C station, which we did. However, the RER C line is a tangled web and our nearest stop required the aforementioned painful transfer at Champs de Mars – Tour Eiffel.

If you’re staying in one of the main tourist centers of Paris, head for one of the stations between Champs de Mars and Saint-Michel – Notre-Dame bound for Versailles Chateau – Rive Gauche. The palace entrance is a 5-10 minute walk from the station.

The gold-encrusted facade of The Palace of Versailles.

Twin columned buildings stand on both sides of the courtyard at the palace’s entrance. The inscription reads “To All the Glories of France,” added at the request of King Louis-Philippe when the palace was converted to a museum in 1830.

Prior to the French Revolution, it was believed that the king was chosen by God. Louis XIV had the Royal Chapel built to allow the entire royal court to attend daily mass.

A bust of Louis XIV sits in the Bull’s Eye Salon of the King’s Chamber.

The extravagant Mercury Salon in the Grand Apartment was more often home to gaming tables than sleepover guests.

Looking up at the chandelier of the War Salon. The murals on the ceiling illustrate centuries of French military conquests.

The Diana Salon, named for the goddess of hunting, served as Louis XIV’s billiards room. Two seating areas were reserved for ladies of the court to cheer on the king as he played.

The 240-feet long Hall of Mirrors was a passageway for visitors waiting for an audience with the king. The ostentatiousness of the hall was intentional as visiting foreign leaders would have to make their way through this show of French power. 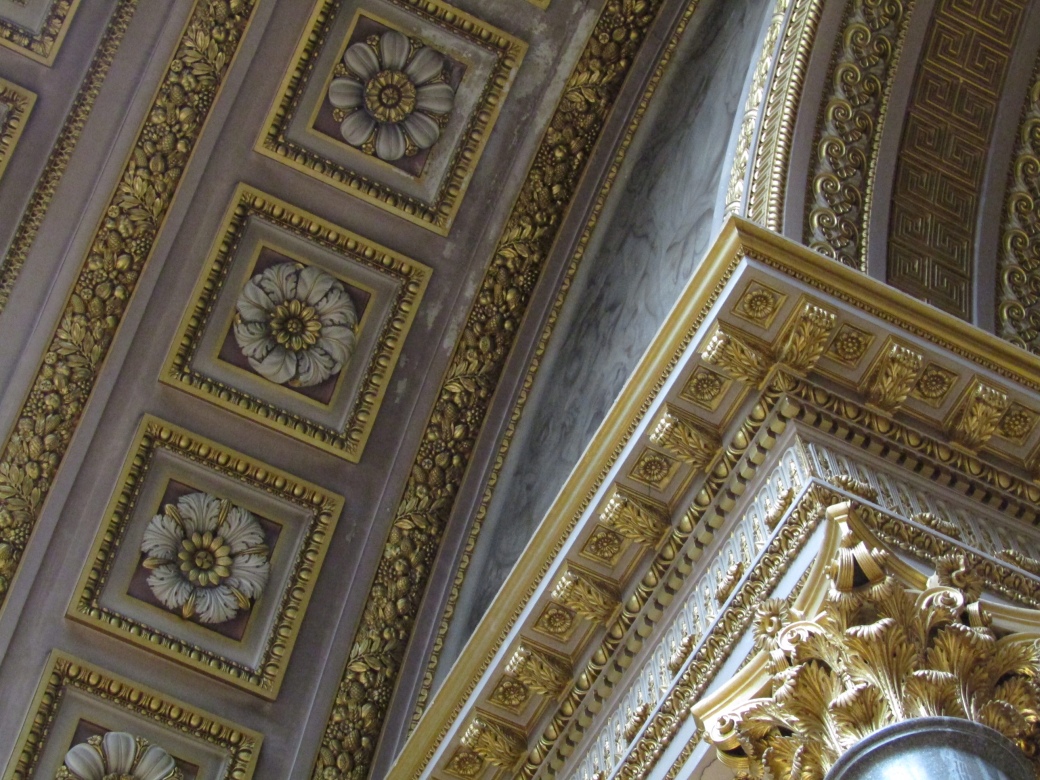 Detail of one of the archways in the palace. The amount of work that went into just the decoration of the palace is mind-boggling. 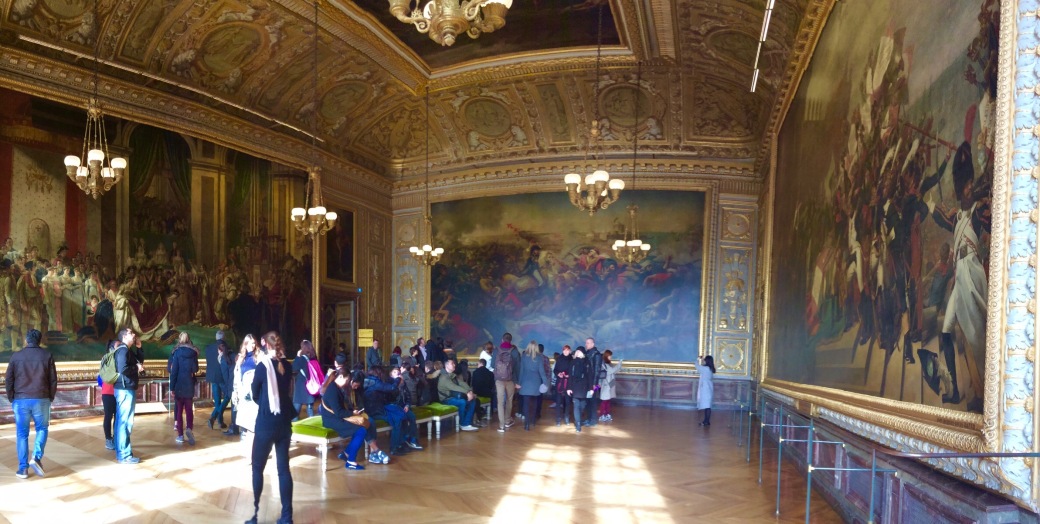 The Coronation Room holds three massive paintings, including a copy of “The Coronation of Napoleon.” The original once hung in Versailles, but is now installed at the Louvre. My favorite part of this painting is the depiction of Napoleon’s mother in the center. She declined to attend the garish ceremony, but was painted in at her son’s request.

Looking at the palace over the gardens.

A view of the massive property from behind the palace looking toward the Grand Canal.