Back home, heading to the coast for the day didn’t require much thought. Hop in the car, swing by the grocery store for some snacks and make the hour-or-so drive to the beach.

Last Friday, we decided to spend the weekend at the Jogasaki Coast on the Izu Peninsula southwest of Tokyo. I get the sense that a “trip to the coast” isn’t something that’s just done from central Japan. It requires some planning: finding a place to stay, mapping out the three-hour train ride… however, the swinging by the grocery store for some snacks part is the same. 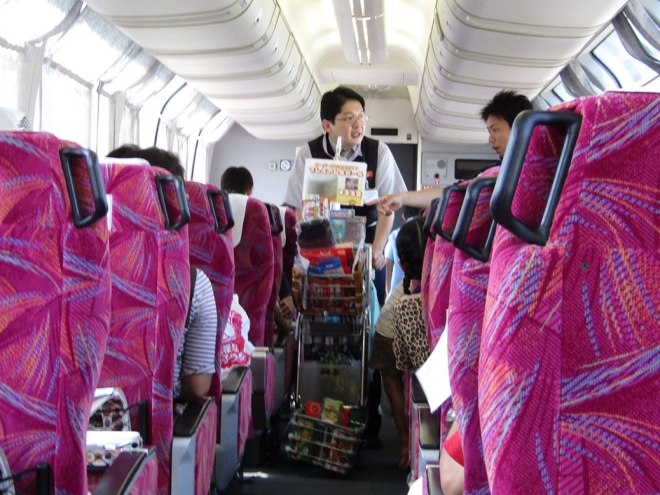 The snack cart on the Limited Express train, complete with beer-on-tap

But, we made it happen! Things came together nicely as we found a low-cost ryokan (Japanese inn) near the main train station in Ito city. The limited express train from Tokyo follows the coastline and, similar to the shinkansen (bullet train), offers reserved seating, a snack bar and a snack cart, complete with beer-on-tap. I’ll write more about train culture in the future—the way people behave on the different types of trains is fascinating.

The six-glass sampler at Izu Kogen Brewery included a yamamomo champagne beer, an orange beer and a stout made in honor of the 1998 summit between Russian president Boris Yeltsen and Japan’s prime minister Ryutaro Hashimoto

Our grocery-store buffet at the ryokan included yakisoba, inari sushi and dango among other things

Locally-made Shizuoka Cola is made with green tea, of course!

Eating is a big part of traveling and this trip didn’t disappoint. We had an amazing vegetarian lunch at Cafe Sora and a fun and filling dinner at the ryokan made up of random things picked up at the nearby grocery store.

Sampling meibutsu—the Japanese word for famous products of a region—is a fun way to get to know an area. In Ito, that’s wasabi, mikan (mandarine oranges) and yamamomo (bayberry). We had wasabi ginger ale, yamamomo soda (and beer), and mikan ice cream (and beer).

The area around the coast is a national park

This couple brought their cat hiking with them and posed for several pictures on the Hashidate Suspension Bridge.

After our lunch at Cafe Sora, we hiked along the coastal trail. From Renchakuji Temple, the path south takes about three hours to get to the Hashidate Suspension Bridge. The trail winds through forest and along the rocky coast, offering breathtaking glimpses of the sea.

Our room at Hinodeya Ryokan

Staying at a ryokan was on our short list of things to do while in Japan. We stayed at the charming Hinodeya Ryokan a short walk from Izu Kogen Station. The small guesthouse has just a few rooms and the service was excellent. We were given the quick tour and shown to our room, which was nearly as large as our apartment! A small carpeted entry area was separated by traditional sliding shōji doors leading to two tatami-floored rooms.

A chabudai (low dining table) was arranged in the middle of the first room where we were served iced green tea. The second bedroom was made up with traditional futons. We were given yukata—light cotton robes—to wear around the ryokan or even out on the town!

The shared baths were separated by gender, but they set us up in the smaller women’s bath so we could relax together. All of our previous onsen/sento experiences have been in the gender-separated baths, so this was a pleasant change to be able to share the experience.

The next morning, we were served a traditional Japanese breakfast in the main dining room downstairs. We wore our yukata to breakfast and laughed when a Japanese family entered the room dressed in their normal clothes. Oh, foreigners! The breakfast included rice, miso soup, tsukemono (pickled vegetables) and a hotplate to make a small omelette. They also had a pickled shrimp dish and a whole fish—head and all—split down the middle. We just moved the fish dishes around a bit, not wanting to be rude.

After breakfast, we were served coffee in the “family room” where the lady who made our breakfast showed us pictures of her garden. At checkout, the man who seemed to run the place asked where we were going. I told him we were headed to Mt. Omuro and he said he’d give us a ride, turning an hour-long bus trip into a 10-minute drive. Plus, riding in a car is a rare experience, so that was an added bonus!

Mt. Omuro, a dormant volcano with an archery range in its crater

Thanks to the lift, we arrived at Mt. Omuro just after the cable car opened, beating the crowds. From the top of the grass-covered dormant volcano, you can see the surrounding mountains and farmland, the village below and all the way out to the sea and the Izu island chain. An archery range has been set up inside the crater. A man and his daughter fired arrows while tourists watched from above (see the video below).

Every February, the sleeping giant burns brightly, but the scheduled fire and smoke don’t come from within. The Yamayaki of Mt. Omuro is one of the area’s most popular events as the grass is burned to promote healthy growth for the coming year.

Ito was the perfect weekend getaway; a soul-refreshing trip to the sea.

Travel Tips: How to Get a Chinese Visa

Day 1: The Adventure Begins in Taiwan